Google Pack is now available for Vista as well as XP. And there are a ton of goodies that you can install, though some of them are from well-known companies, such as Realplayer, others are from Google itself. I haven’t used Google Pack for quite a while, but when I went back I was quite surprised at the range of installs now on offer. 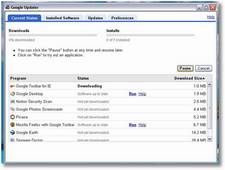 I did check around and found that some of the software requires money to get full functionality, such as Skype for SkypeOut calls and Norton for updates after six months.

Many of these resources can really help the avid blogger/investor in a number of ways that will enhance your productivity a great deal. So check them out and see what piques your interest.

If you are interested in other online applications, Digital Nomad has a few good suggestions, too!