It seems that Google has a new browser out… I wanted to try it but my pc at home isn’t compatible. It’s only XP SP1… So enjoy the video.

If you want to try Google Chrome, download it here. Update: I finally downloaded it and installed it. I’m adding a simple screenshot to show you the browser. I like the simple style that hides all the crap that we typically add to browsers. 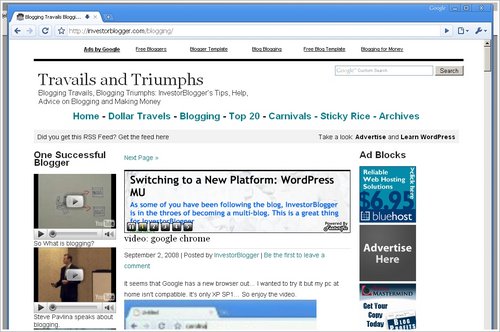 I wonder how many similar ‘theme’s for IE and FF this will spawn! 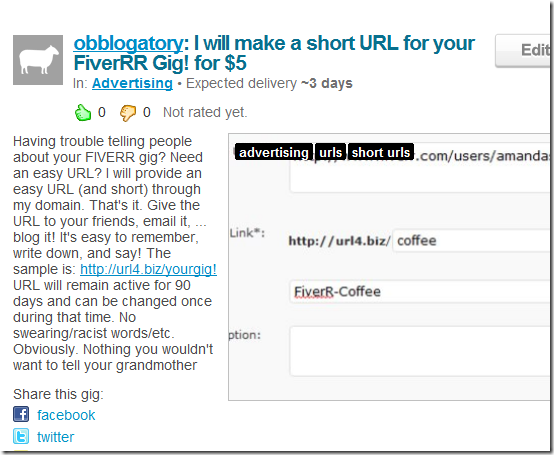 Hey, my first gig on FIVERR.com … never used it before!

It’s been three or four months since my last update on SBI blogging. Since then a lot has changed, and not much.

Traffic is growing now, in some ways dramatically. In crude stats terms:

Pages: we have now 101 pages of content on the site vs. about 75 pages in May. So content has accelerated. We’re now taking a break from content, but for a good reason. 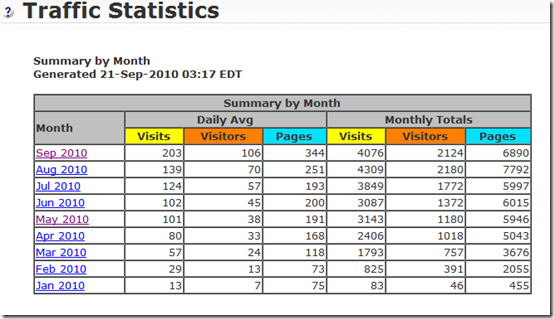 Traffic is now approaching about 9~10K pageviews a month. In fairness, Analytics reports numbers much lower than this, but they also show month-on-month growth. And Analytics is quite restrictive in how it counts visitors.

Also, I added Adsense in May and that generated a minimal amount. This month looks like it means that the website paid for its hosting this month, the first to do so.

The challenge very much is to increase backlinks: through more Ezine Articles, some of which are doing well; directory submissions, I’ve already had some help; and tidying up the content/structure/images. There’s quite a lot to do even though I’m not adding any content.

My frustrations revolve around the Dreamhost Server which has been acting up all month. I’m still not sure what caused the dramatic jumps in server activity, but I’ve split up some sites, blocked a lot of Chinese spiders on several sites, and am now looking at what went wrong.

It seems that with using my server as a kind of hotimage linking for some of my other sites, and an adserver that it may be too much for the server to handle along with thousands of requests from Sogou, Baidu, etc.

Site #2 is now back on. I’ve started adding a page a week to this site, more later on what’s going on with it. Site #3 is also up, though at the moment, I’m just lightly repurposing and redirecting content from my blogs to this site. Still, it bodes well.

Both of the other sites are showing similar levels of traffic to PCB in the early days, though I’m not sure how big any of them will be. So I’m focusing on just adding one page a week until I have a better time arrangement in the new year!

It may be that in 2011, both InvestorBlogger and Obblogatory Blogs will cease new posts, I’m undecided about this at the moment, but I’m increasingly skeptical that blogging content is hanging around longer than a few weeks.