If you like this blog, why not subscribe to this RSS feed. Or get our free email updates.

Last week the news was all about Microsoft making a bid for Yahoo! InvestorBlogger had already written about this story in January as a great deal for Microsoft, but a bad one for Yahoo!Both companies are struggling with their own issues at the moment. And both companies’ stock prices really haven’t done much in the last five years.

Whither Yahoo?
Yahoo! has had several disappointing quarters of results, and it is struggling to get its new advertising system, called Panama, working properly. In fact, this set of problems caused Yahoo! to miss its earnings targets. Despite some of the stumbles of its online services, Yahoo! Photos (now being closed) debacle being among them, Yahoo! has survived and even prospered as #1 website (as desribed on Alexa). The ability to adapt and grow online has certainly stood this venerable dog in good stead. It didn’t have the deep pockets and universality of ‘need’ that Microsoft has, but it managed to maintain a sizable amount of goodwill among its users.

Even in the face of Google, it has maintained its #1 slot as Google grew from being merely a provider of search services to Yahoo! to its very own portal look. And yet Google is still not #1 on Alexa! That is not to say that Yahoo! is without its own challenges: though it has refused Google’s offer, there are still other well capitalized companies out there who could merge with Yahoo! and make a compelling value proposition.

Et tu, M$?
Microsoft is facing an oncoming challenge in a number of fronts. While it is still the engine of growth for the PC world and has just pushed Office and Vista out of the door, the web-centric world is growing much faster than boxed sales of OSes and Office Software. In fact, MS faces three considerable challenges: OS competitors; opensource applications; and lack of innovative spirit – mostly due its size.

And the growth of Linux, Mac and continued use of older PCs on Win98 or XP are all limiting growth of sales for MS. Bill Gates used to say that Windows 98 was XP’s biggest competitor. Well now, XP’s Vista’s biggest competitor. On the Mac front, the Ipod is helping drive sales for Mac systems, as well as having cheaper smaller form Macs. And Linux, innovation on Linux is incredible. There are now hundreds of Linuxes available for download, though none of them is really the primary candidate. Despite the variety, its OSes seem to still be the primary choice for most sales. 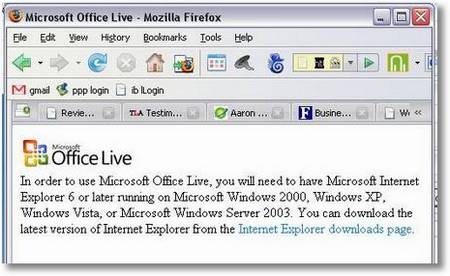 However, MS browser share is dropping. At last count, it had already fallen below 80% of the market share, while Firefox had reached a little over 15%. And Firefox isn’t a company that can be bought!

Microsoft is also facing increasing competition on its Office Software. There are an increasing number of alternatives: including OpenOffice, a bunch of smaller, nimbler competitors. So, with so many little competitors and several giant, but tangentially different, competitors, at what point is the tipping point reached for Microsoft?

Yahoo! + MSN = YahooSN?
Who takes over who? In this situation, MS doesn’t really get the Internet, even yet, despite its investments it is an also ran; previous experience of MS takeovers is that they really merge the original company out of existence, leaving a shell of it under MS hands. Hotmail vanished like that, as did Listbot, and countless other smaller companies. Could this happen to Yahoo!? Of course, Yahoo! takes over MS is highly unlikely as Yahoo! has no experience of any OS, consumer or otherwise. Yahoo! couldn’t really do that.

The best scenario would be for MS to take over Yahoo! in a buyout merger. Then reorganise its MSN properties (and all of its online content) into a new Yahoo-MSN! service. Once completed, the new division would be IPO’ed again, leaving the original MS and Yahoo-MSN! as two complete, larger, more clearly defined companies. That wouldn’t mean they compete with each other, but that Yahoo-MSN! would compete directly with Google. Of course, the Google juggernaut would just roll on, with both companies in its path. But smaller, narrower focused, well-capitalized companies would be better placed to innovate in much the same way as Google does, and as MS does not.

Is there an opportunity to buy/sell YHOO/MS stocks and make some serious dosh? What do you guys see? Or should we all just buy GOOG? Comment away!

1. A lot of the initial data comes from http://marketshare.hitslink.com.