Most Taiwan banks have no plan to levy a “deposits account keeping fee” from customers who have only a small sum of outstanding deposits in their accounts, although some foreign banks have already taken such a move.Some foreign banks, including Standard Chartered Bank and HSBC (Hong Kong and Shanghai Banking), have started charging a monthly fee from clients with less than NT$10,000 of deposits in their accounts.

Taiwan banks reluctant to charge ‘account keeping fee’ – The China Post – this article is typical of the usual double-speak that English newspapers in Taiwan are guilty of. The story is quite simple: with limited sources of income available, banks are now resorting to charging fees on low deposits. Typically this behavior is being seen in foreign-owned banks, who have already had account minimums for quite some time (another fact that ‘escaped’ the author of this story). The real news in this story is hidden away at the end: “The move of collecting the fee needs to be discussed and approved by the bankers association, he said. The talk about the possibility that Taiwan banks may charge a “deposits account keeping fee” from customers has caused concern from legislators.” 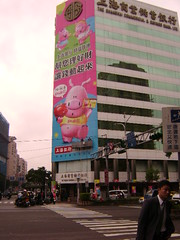 Photograph of Shanghai Commercial and Savings Bank, in Taipei.

In real speak, this means legislators and banking organizations are already considering where and how banks charge regular amounts for bank accounts with less than a minimum amount in them. With interest rates as low as they are, it’s unrealistic to expect banks to shoulder these costs in the long term. However, looking after people’s money like this will attract a lot of criticism: why? Because banks are expected to use this money to make more money, it seems unreasonable that they should then make money on ‘free money’ and charge for the privilege of looking after it. 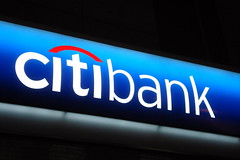 A customer who’s charged such a fee will likely terminate their business with any bank that attempts to charge them such a fee. Worse, it may make it more difficult to market to these customers in the future when things get better, and everyone has more money. Customers will remember who tried to short-change them and who treated them with respect.

There’s one local bank I had to open an account with that I hated from the first day I dealt with them. They were unknowledgeable, unhelpful, unprofessional and discriminatory in their treatment of local foreigners. Oddly, enough, the credit card that I have with them through their credit arm has been the perfect opposite of that! Anyway, competition is heating up in the local banking market with local bank consolidating, and foreign players eager to get into the China market. Truly, Taiwan represents one of the few relatively untapped banking markets in Chinese Asia at the moment, still.

I’ve been consolidating and reorganizing both our personal accounts and business accounts for some time, as a result of the credit crisis. While I haven’t got that much money to move around really, I’ve tried to make sure that risk is more diversified between bank accounts. In other words, I wouldn’t want to be locked out of a supply of money due to bank run or temporary closure.

For personal finances, I’ve divided my money between one local and one international bank. For business finances, one month’s emergency cash was deposited in another branch of another local bank. The only weakness in the chain is that personal and business finances overlap in one local bank. I should really do something about that by moving some money to another local bank. Unfortunately, there aren’t many banks in our area at all: and none of the big Taipei city banks have branches here at all.

Follow the scorecard as I recap on 16 years of investing... just how good was I, compared to the market? Stay tuned!

InvestorBlogger.com is a participant in the Amazon Services LLC Associates Program, an affiliate advertising program designed to provide a means for sites to earn advertising fees by advertising and linking to amazon.com. Amazon, the Amazon logo, AmazonSupply, and the AmazonSupply logo are trademarks of Amazon.com, Inc. or its affiliates.

Return to the top of the page