With the PR Nuke Out still on, Izea finally launched this week, and I’ve already got my stats working . In fact, I’m lucky as I have stats running back to late November last year! So I get quite a head start… Still, a lot of questions remain unanswered…. I’m hoping this series of post will help to answer some of them.

So what is Izea? What is its intended purpose and how well does it implement the ideas? In this series of posts, published daily, I’ll be looking at Alexa, PageRank, Technorati, and Izea’s RealRank.

What is IzeaRanks? What is it trying to solve?

There are a variety of sources available on the internet that aim to measure traffic; however, most of the sources that provide such information are for the private consumption of stats by webmasters and site owners.

There aren’t so many external and independent sources of information, and not many reliable ways to rank one site vs. another. The few that I know of are well known to many: Alexa, PageRank, Technorati, and Compete. It’s into this marketplace that Izea’s RealRank has come .

Alexa:Alexa is one of the more popular metrics used by advertisers to measure traffic to a website, pageviews within that site, and ‘reach of the website’. You can take a look at my current stats by clicking on the image below: 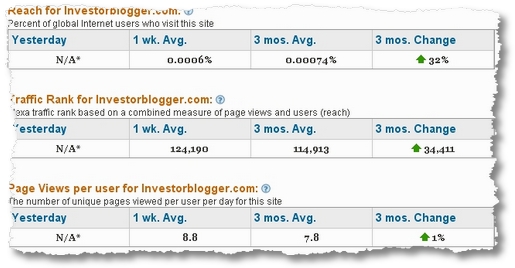 These stats are for the current month of January, 2008. The limitations of such stats for advertisers are obvious as they disproportionately measure traffic from a particular group or groups of users that may or may not be representative. The theory goes as your site becomes more popular the stats will more closely approximate what is going on… which is great if you are Yahoo! or Google.

For most bloggers, these stats tell a woefully incomplete story, especially about where readers come from, what they look at in particular, who the visitors are, etc., though some comparison is helpful. Of course, I would still recommend that you add this code to your website: the more information for advertisers the better. In fact you can see the box on my sidebar. And I won’t be moving it any time soon. If you want to install it, read more here. 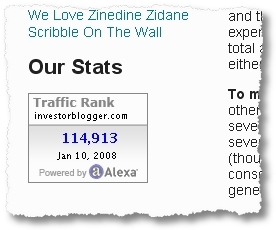 Despite my recommendation, I’m under illusions that, since the stats are drawn from a relatively small userbase of toolbar users and java code (which you can add to your site), the metrics are highly suspect. Case in point: I’ve got a ranking similar to about six-eight months ago with traffic that is more than double what I was getting. My traffic has jumped since May, and my Alexa ranking is relatively weaker.

The upside for Alexa (and it still is the leader in this respect as an external source of information), though, unlike the following two suggestions is that they attempt to measure traffic on a regular basis to websites, not just blogs, and they attempt to provide a long term measure of such traffic.

Post two in the series will look at PageRank, look for that on Monday…

First I should say that I’ve been a blogger with Payperpost for quite some time, and as such I’ve been working with them to provide interesting content for advertisers. Izea is a company that proposes to build upon the foundations that Payperpost has established.