Yes, after all the turmoil in the markets, I reached a decision. I have decided to blog about my finances in more detail. While the exact extent is uncertain at the moment, I have decided that I need to track the performance of my investments more regularly.

A step back in time!

In truth, I’ve been keeping (initially monthly but now quarterly) updates for more than 10 years anyway. I can trace the finances all the way back to about 1995 when I had just got married. In those days, the record keeping was pretty unsophisticated, but I did use Microsoft Works 3.0 to tote up my assets. 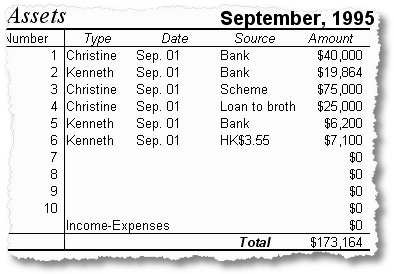 I think it was around the time of the 1996 Taiwan Straits missile crisis that focused my mind on how much money we didn’t have. While things were pretty tense here, it made me realize how important having some cash in the bank was. Shortly after that, I set aside nearly HK$10,000 in a bank account that earned a pitiful amount of interest for quite some time, but at least the money was there, for an emergency.

High or Low? Which figure?

Any guesses on what the current figures are? When did you start doing your Net Worth Statements?

With increasingly large parts of the population connecting via broadband, esp. in Taiwan ADSL, Google has been running experimental new pages in Taiwan, Hong Kong and Korea that seek to take advantage of some of the extra bandwidth available to users.

I’ve included a look that shows how the Google or iGoogle page looks in Taiwan at the moment, just in case you can’t access it. Features to note are: a current time (based on the pc clock) in the top left, nicely presented triple column themes with configurable content, links to videos and images in the news section. 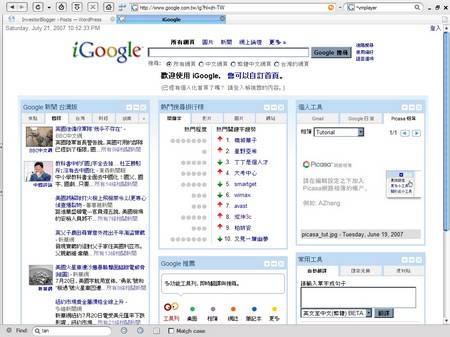 The central column links to Google’s search results: images, videos, etc. The right column includes links to your email, picasa, and calendar. To view this, in Firefox, you will need to choose the appropriate language in the View Menu. I’m using UTF-8 which works well. This story was linked from PC World – Google Testing New Homepage Design in Taiwan, Hong Kong . Unfortunately, by the time I came to write this posting, the Korea page had returned to its normal look.

Hong Kong Adapts to the
Brave New WorldOne of our favorite anecdotes about Hong Kong dates back to 2003, when the S.A.R. was mired in doom and gloom (property prices were down Ã¢â‚¬â€œ70% from their highs, people were hysterical about SARSÃ¢â‚¬Â¦). That year, taxi drivers went on a strike to ask forÃ¢â‚¬Â¦ lower cab fares! The logic was that, at a lower price, more people would ride taxis (the government refused on the premise that the cabs would then start competing with the buses, tramways & MTR). If nothing else, this story illustrates HK’s amazing power of adaptation and “can do” attitude.

An interesting discussion that seems to follow on logically from the Globalised Economy. I had wondered if HK was in fact just raising taxes, but it seems to be actually shifting its tax portfolio. END_OF_DOCUMENT_TOKEN_TO_BE_REPLACED