It’s morning time in the US, late evening in Taiwan.

A Delicious Meal: Needn’t be Expensive to be Delicious
We really didn’t do much today, but we had a lovely dinner last night at one of our favorite restaurants Dante’s (not the coffeeshop by that name), located on the campus of the National Taipei University of the Arts in Taipei City. In fact, we live less than ten minutes’ pleasant walk from the campus, so we go there often.

The meal is quite simple and very affordable: an small but well-prepared all-you-can-eat salad bar with lots of fresh salads, cold meats, and so on. Next to that is the deserts with cakes and fruit. There are also breads, and soup you can feast on. Once you order, you will also get a main course that you can select from pastas at the low end to steaks at the high end. In all, we paid about $1250 for a nice meal for two, including everything but wine. The view over Taipei is quite staggering at night, and well worth the price: you can typically see 101, the Shin Kuang Mitsuokoshi Tower and a lot in between. It’s a fantastic view. 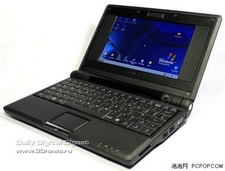 I came away suitably impressed with the machine, in a number of respects. I found it easy to use, networking was straightforward, it was easy to find the applications, it was a snap to start up, shut down. So, I think this device will be remembered as the device that ‘created’ a whole new generation of small but highly effective smaller-than-laptop internet connected devices. It is truly a wonderful machine… but here’s why I’m not plumping for it just yet:

1. the keyboard and touchpad: in a word, awful beyond belief;
2. the screensize: why not make it 10″;
3. and, the available memory is too small.

A slightly faster processor would help, but in the Linux system it was fast and responsive. The XP model was poky beyond belief. It was great to work in a familiar environment, though the downsides of the XP model really left it wanting more, much more: more memory (1GB), more disk space (at about 350MB), a bigger screen, and some useful productivity tools. In two of the those four areas, the Linux model was easily better. Easily. The XP model would have been quite easy to add software, too, except for the lack of space. The Linux model… well, I couldn’t figure out how to do that, my level of technical Chinese isn’t great yet, so I couldn’t find the right options in the screen.

In both cases, though, one of the biggest disappointments for me was the lack of an English Language model for sale. I was told that Taiwan only had Chinese Language Models (a fact that I doubt!). So, I’m holding off, for now. For NOW! But can I wait for Spring’s new models…? I wonder.

BlogDesk
BlogDesk has been giving me grief, though, and I think I know the reason. First of all, here’s the error message I keep getting and I don’t have a clue what it means… but I tell you, it’s because of the video I keep trying to link to. It’s screwing up this posting as I had to rewrite almost 50% of this entry. Blogdesk caused my PC to emit a string of beeps before it gave this error message.

And the Video that’s causing all the trouble: almost like it was intended to create problems similar to the one in the video. Watch it, but I’m just linking to the page, until I can figure out why the code is borking my system! Perhaps it’s a mole inside College Humor.