Since yesterday’s post on Alexa and whether it really works , today we’re turning our attention to PageRank, though I hardly need to introduce it here. I’ve already written about it in a number of posts this past few months. You can search the archives to find out more about it… 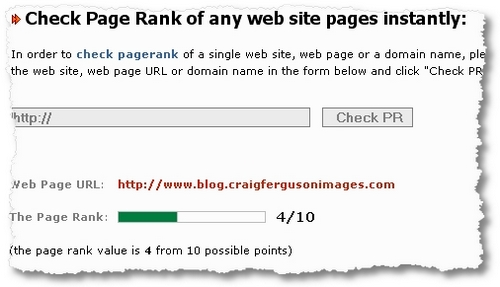 By now, if any bloggers or visitors to this blog don’t know what PageRank (PR) is, I’d be surprised. In brief, Page Rank is supposed to measure the value of a page’s content by examining the number and types of pages that link to that. Pages are then assigned a value between 0 and 10. The numbers represent a logarithmic scale so that it is easier to go from 0 to 1 than from 7 to 8.

There has been a lot of discussion of the actual formulae which are used to calculate PageRank, but most of the actual discussion is hypothetical in nature as the formulae are trade secrets. Additionally, some flaws have been discovered in the calculation that have allowed website SEO experts, who specialize in improving the SEO of websites in search engines like Google, to inflate (both legitimately and illegitimately) the page rank of their customers. Naturally, Google is concerned to protect the system, and regularly tweaks or enhances the formulae.

Page Rank is not immediately obvious (like all metrics) to visitors but there are a number of websites, tools, and plugins that enable users to access this information through Google’s API. I’ve been a fan of several such tools, including SmartPageRank (which collates information from a number of sources as well). Indeed, there are a bunch of websites that also provide metrics that try to predict the value of future page ranks, as well. While it’s not difficult to find out your website’s PageRank, the value that most people know of is the Toolbar PR, that is typically a historical weighting, and is only made available about every three months or in Google’s own time. Real PageRank is a dynamic system, that is continually being updated as Google crawls the web and updates its own database.

PR CAN be bought – at a price

And Google often tries to remind webmasters that PageRank is something that a good website has, but it can’t be acquired. In reality, though, it can. Despite the best efforts of Google, the war of skills that has taken shape between the PhDs in Google and the SEO experts proves that, if you have enough money and contacts, you can DEFINITELY influence your PR ranking. Google has warned that it will crack down on what it sees as deliberate manipulations of its proprietary rankings many times. But that has done almost nothing to stop the practices. Instead it simply raises the prices of such services and the rewards to those who keep or attain a higher PR.

Worse, many advertisers and intermediary companies rely to a greater or lesser extent on the Toolbar PR as a way to measure a site’s worth or value. Hence, for Text Link Ads, for example, they typically are interested in website’s with a PR2+ and some traffic. Other companies require a PR3 or PR4 as a minimum.

Some companies that provide advertising services have recently started using blogs (and other types of websites) as a way to advertise for traffic and SEO benefits. So those companies have developed products that use text links, sponsored posts, and other advertising methods and they have adopted page rank as a metric in evaluating the pricing of advertising (including text links, paid posts, and so on) either solely as Payperpost used to, or in concert with several other metrics (as Text Link Ads currently does).

The following is a list of some companies that have used PageRank at one time or another either as a sole metric or combined with one or several other metrics:

I’ll highlight several of those companies with whom I have an ongoing relationship to show how PR is still being used: Text Link Ads, Payperpost and LinkWorth.

Text Link Ads has a page that outlines the approximate values that different page rankings have and the earnings potential for those sites.

The Text Link Ads company also has a calculator page that can help to evaluate the monetary value of your blog by using PR and ad position. Unfortunately, it was not available at the time of this blog posting. But you can usually link to it at TLA Ads Calculator . But I have a screenshot that showed what it used to look like. 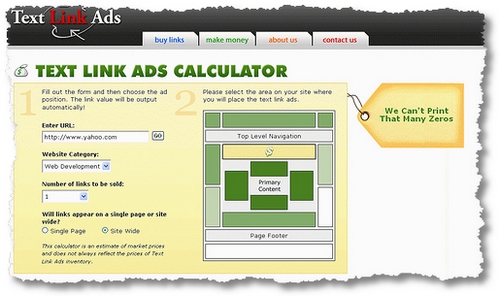 In fairness, Text Link Ads also use several other factors, including Alexa to evaluate the worth of a page’s links in its marketplace.

Payperpost is more discrete, but once a blogger becomes a member, his or her blog(s) will be recorded as having a set PR value and posts (known as ‘opps’) in the system will be opened to him or her according to the PR requirements of the advertiser. Advertisers may or may not require a minimum level of PR, and prices will be ‘varied’ according to the PR required. PR0-2 blogs may find opps that pay from $5 to $10, while PR3-4 blogs may say more opps with prices as high as $20. PR5+ blogs can see significantly higher prices.

Once you are in the system, all the blog information is kept in the ‘my blogs’ page and the PageRank is displayed conspicuously. See… 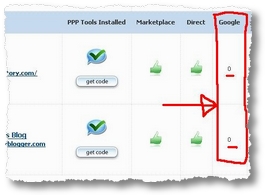 There is a similar page in the advertiser’s area that allows advertisers to specify PageRank: Take a look. 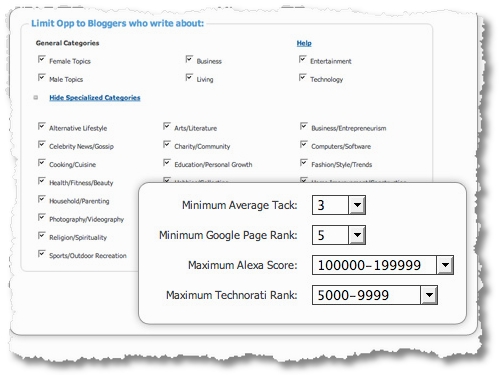 Though Technorati ranking has now gone, other rankings and segmentation features have been added, including regions, continents, age, gender, REALRank, etc.. And many advertisers do not particularly care about PageRank or select it preferring to have as wide a range of blogs linking as possible.

LinkWorth is a company that for me has been a dark horse, as business is picking up slowly with them. LinkWorth offer a variety of products, such a variety that it is difficult to compare them to any of the other companies: text links, posts, adverts, banners, to name but a few of their options .

When webmasters sign up for the program, they are required to enter their websites in the database. The websites are then displayed for customers and you can click on the ‘stats’ to see the MOST complete set of stats of any of the three sites in this discussion. LinkWorth not only displays Google, Yahoo, and MSN stats, but also Alexa, DMOZ, AND their own LinkRank stat. 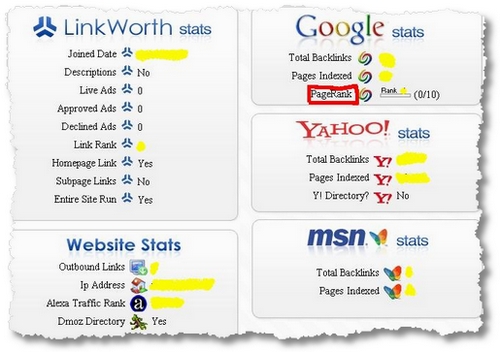 Of course, the past three months have seen the so-called Page Rank smackdown or bitchslap that somewhat arbitrarily (and unfairly) penalized the PageRank of many prominent bloggers and many not-so-well-known Payperpost Bloggers (et al.). This re-ranking is still going on at this time as Google is updating its results for January 2008. Of course, this has evoked a huge reaction in the Blogosphere and long discussions in Problogger and Matt Coutts blog that has included the ‘pros’, the ‘cons’ and the hypocrisies of all involved. It’s fascinating reading for those who have time. One thing is sure: PageRank is a proprietary formula, and Google is determined that it will succeed in protecting both the formula and the results it creates; in addition, it will seek to try to disrupt the markets that use the PageRank as a way to make money. Of course, that is Google’s right. But whether Google goes, will the market no follow?

On a personal note , in 2006 this site had a PR of 5, which was before I moved the site to a new location and refounded InvestorBlogger in August last year. Since then it lost its PR ranking moving from 5 to 4 to 3 as the links dried up. Then in one fell swoop, just as it was looking like it was going to be a PR4, it was manually dropped to a zero by Google. Oh,well.

In truth, I could litter this post with any of the hundreds of good discussions out there on PageRank and no-follow, but I will let you simply follow some of the good discussions by asking you to share any that you find in the comments section itself. Do you care about PageRank? What do you think about buying PageRank or selling PR? Share your reactions here.

In the competitive Web-o-sphere, a competitor is a click away, and in the third in the series published on Tuesday, we’ll be looking at Technorati. Then on Wednesday, we’ll turn our attention to the newcomer on the block, IZEA’s REALRank .

—–
Originally published with the wrong date. Why does WordPress do that? It’s very annoying. Date and a few links added.

And now it’s time for a Disclaimer: I’ve joined all of these companies but those highlighted with a ‘*’ have never provided any useful work for me. Those highlighted with a ‘&’ have been more successful, but I’ve not done much work in the past three months for them for various reasons, including poor rates, insufficient opps and poor quality advertisements. While those with a ‘#’ mean that I’m still working with them on a regular basis.
—–