For those dedicated Ooo users, Version 2.3 is now out. You can pretty much try it out, even if you don’t keep it! It installs simply, and removes simply. Even on Windows 98se it doesn’t need a reboot usually. I wish I could say that of most other software. 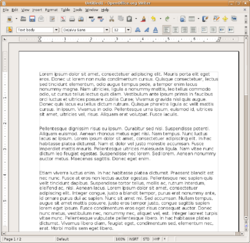 OpenOffice.org 2.3 incorporates an array of new features and enhancements to all its core components, and protects users from newly discovered security vulnerabilities. It is a major release and all users should download it.

Plus: It is only with 2.3 that users can make full use of our growing extensions library.

It really is available on many platforms from Win32 to Mac to some very esoteric platforms (including Solaris). I do think that Ooo isn’t yet COMPELLLING as software, but it is developing some characteristics that are making its adoption in the future a certainty.

Why? Well, compared to Microsoft’s product, it offers a number of advantages:

Though it is quite a jump from lower end office applications like MS Works, or Apple Works, and there are few ways to import text directly from some of these alternatives. For example, to get text from Works, you first have to save it as an RTF file or HTML or even a DOC.

Many companies have already adopted it, as has ours. We’ve got five operational computers, but we only use MS Office on two systems, as we still run Win98se on two ‘old’ systems. Eventually, that will be reduced to one. Then zero when the oldest PC dies.

We will not purchase new copies of Office at all. Integration and standardized systems make things much easier, but CDs with serial numbers, activation, and the continual problems with the Genuine Advantage program really distract from the point of buying software: to get the job done!

You can find out more information from the Wikipedia pages on OpenOffice as well as the comparison of Office Software page.

What is your attitude ot OpenOffice vs. M$Office?