It’s been a really long time since I did anything newsy on this blog. I’ve posted “recent posts” lists, but nothing newsy. So it’s today.

Do check out my post on how to make a newsletter, my updated download page, and the language of spending money .

I recently noted FYI my own stock holdings. I’ve recently added to my own holdings by purchasing some shares in GAIN which has an attractive dividend. I also had a look at Bank of America, picking up some there. I’ve been looking at banking stocks for a while, and wondering if the worst is past or not. It’s impossible to tell. But there were a number of factors that I liked in BAC: it’s not the only bank I’ve looked at, I’m also looking at Citibank, and RBS and, of course, HSBC in Asia. Banking stocks are somewhat undervalued at the moment, and will come back in price. A friend was suggesting looking at picking up Citibank and AIG shares… Both of these recently took hits.

I’ve been an EntreCard User for quite a few months, but the recent news about EntreCard has been quite interesting. Overall, in the two months since I started using EntreCard has become my second largest source of referral traffic. They aren’t always the best quality traffic clocking in an average of little over 60 seconds on the site! But that may be that my site isn’t well optimized yet, esp. for drive-by traffic like that! 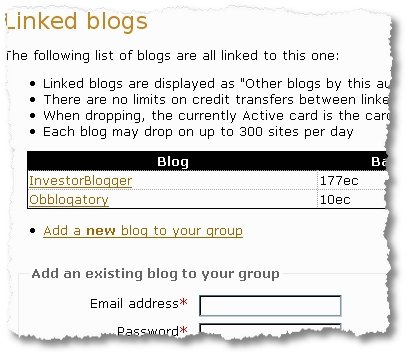 Anyway, EntreCard are now allowing users to add a blog to their pre-existing account. I’ve already added an extra account, and I’ve funded it with some credits, too. It’s quite easy to do. They’ve also announced a new e-book that explains what EntreCard’s all about. And they’re promoting it by giving away 2000 free credits on their EC Blog ! I’m already in, as you’ve noted!

New President in Taiwan: Ma Ying-Jeou is the 12th president of the Republic of China

Two months after the presidential election in Taiwan, the new president was sworn in today. You can check the news yourself. Of course, the local stock markets are down on selling the news. You can read the Taipei Times article on his inauguration day nerves. He doesn’t mix metaphors very well: but I can imagine that’s just nerves. 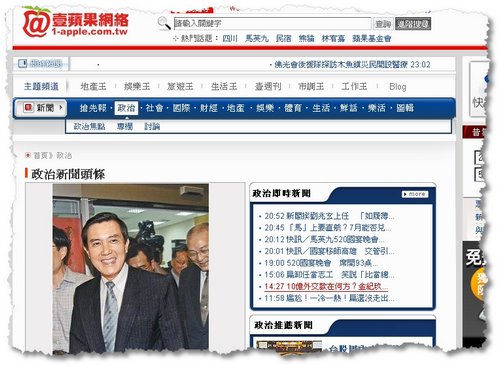 Ma described his feeling yesterday as “treading on thin ice and standing on the edge of an abyss.”

Last.FM – How are you discovering music these days?

It’s not often the words on InvestorBlogger prove right, and I’m not really one to tell people that “I told you so!” But for those of you reading last year’s blog post on the changes at Pandora. 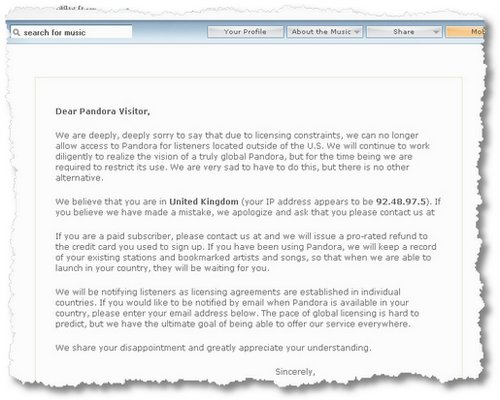 I have been following Last.FM for sometime, but hadn’t realized how much it had grown in scale, scope and funding. While it doesn’t have some of the finesse of Pandora, it is a very good social music discovery service, one that I’m enjoying very much. I’m glad that I will be able to add that to my online listening site. It also has great links to smaller CD retailers who are happy to serve those outside traditional continental US. While the founder of Pandora regretted that closing his sites meant cutting off loyal listeners (as I was).

The letter seemed to suggest that international listeners were listening illegally – well, it’s not that at all. International listeners are now finding other companies that can supply music legally through Streaming Radio, Legal Downloading (from smaller retailers), sites like Last.FM, and much more. It seems that, unless the Big Four music companies and their lackeys do something soon, they will lose a generation of listeners to their music, while empowering a whole rash of local, national and international music providers who are hungry, competitive and LEGAL.