I already hinted today that I would be giving a full response to Michael Kwan’s review, and indeed here it is. For those of you reading this for the first time, I recently purchased a review of my website from Michael Kwan for $40 (during Michael’s 90% off promotion). The review has been published, and you can read the “good and bad of ‘InvestorBlogger.com’ here.” 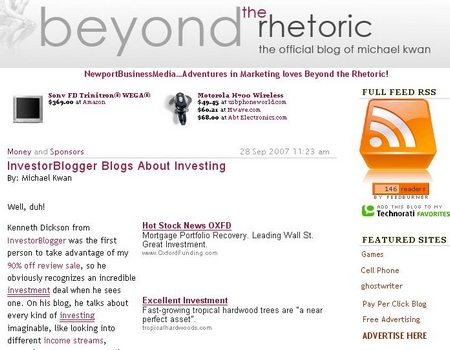 Why get a review?
Well there are a number of reasons why having a review of your blog done is a good idea. Firstly, it allows you to get exposure on a more prominent blog or website and should drive additional traffic to your blog from the reviewer’s website. Secondly, you should experience some SEO benefit on Google’s PR system. It’s always difficult to estimate how much of a benefit you get, as the PR ranking system is always changing, the review moves off the frontpage (will it be linked to? who knows?), but this is not something that should be ignored.

Thirdly, most of us bloggers labor away in our cubicles, offices, SOHOs, or on the laptop on the kitchen table; we don’t always share what we are doing with the people around us, so having an extra ‘impartial’ set of eyes going over your blog can really help to see things differently. For me, this is the principal reason I decided to pay for a review of my own blog. That, and I couldn’t afford the $400 fee for John Chow’s website (I’d rather use that money to pay a hosting fee or upgrade to a private server).

Why Michael Kwan?
I was already familiar with Michael’s work on John Chow, and had found that his reviews were particularly thorough, detailed and insightful. It was when he offered a special promotion that I jumped to do a review on his blog. While it won’t have the same SEO/traffic benefits as one posted on John Chow, at least initially, I felt that the extra pair of eyes was going to be beneficial.

The Results?
After a couple of days, I received the review in good order, all 650 words of it, plus graphics, and numerous links throughout the text to the main page and to individual pages within the blog. It’s clear that he spent quite a lot of time on researching and writing the review. His inclusion of annotated graphics also suggests that he spent some time making the images!

Ok, one surprise was that he mentioned so many of my financial posts… I guess in my large archive, that that’s what has been most recent, esp. with the finance week that I did in August. I had always thought that I didn’t blog enough about finances and investment, but it seems he thought otherwise.

His suggestions: The Big One
Truthfully, his suggestions are absolutely spot-on. In fact, I had been considering a re-design some time in May, but we got very busy running promotions for our business, that I had to put it on a back burner until I had more time to focus on it. I guess it has been in the back of my mind for quite some time… In fact, one of my clients did a redesign in April, and introduced me to a possible designer then. I wonder why I haven’t followed up, nearly five months later….

So, at any rate, he suggests that, if I want to keep the MistyLook theme (and it’s a big ‘if’), I should really make an effort to make it ‘my own.’ He wrote: “That’s still no excuse for having such a bland and generic blog design.” And there isn’t. I still like the theme, it really makes good use of space on the blog, and doesn’t look at all crowded unlike that Bully of the Pandas… So, this is my goal, and I’ll be looking into how to create a new theme. I’m already scheming ideas in my head.

Content is important, but it’s the presentation that will draw visitors further into your site.

The other stuff, too.

Here’s my response to each one:

Summary
I found that the review very helpful for the things he suggested. I don’t know if it generated any traffic directly yet (Google’s analytics is refusing to load for me right now). And the SEO value is very much in the future. I’d still highly recommend this for the suggestions he gave. I’ll add the traffic reports if I can access Analytics. Thanks, Michael. Highly recommended by InvestorBlogger.com.