Many blogs now display Text Link Ads (aff) and for many bloggers this has been a boon to revenue generation as it has provided a more or less stable income for many blogs. In fact, up until now it has generated about $75 for this blog. For other blogs, like John Chow’s, it’s been a lot more, in just March, he earned $1,308.06.

However, today I noticed a seamier side to the way text links are administered. It is possible for text links to become more ‘adult’ themed. Take a look of this screen shot from John’s site. I don’t know if it’s just one of those ads that slipped through the net, or if it was via a different system from TLA. There are a variety of services now providing text link ads.

However, I noted on TLA’s website that they claimed: “Reminder: TLA will not publish any adult, pharmacy, gambling or any site we feel is inappropriate.” 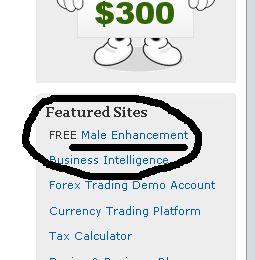 I guess I wouldn’t have noticed as much but since my blog is getting more popular, there have been a lot of very nasty spam comments (thankfully caught by Akismet), and so I couldn’t help seeing this one.

If you’re blogging and use TLA, you have a choice in their program about whether such ads appear or not. You can visit their Ad Approval Section and choose between one of two modes to approve ads:

Approval System A
Allow TLA to editorial approve advertisers to your website. Reminder: TLA will not publish any adult, pharmacy, gambling or any site we feel is inappropriate.

Approval System B
Receive an email notification every time an advertiser purchases a link off your website and have the ability to reject that advertiser. If advertiser approves the ad than the ad is immediately placed. If we do not hear back from you in 24 hours the ad will be reviewed by our TLA editors.

Naturally, their system is designed to generate revenue so they will tend to err on the side of the advertisers in their judgments, but at least you have a window of opportunity to reject advertisements you don’t like. Of course, if these advertisements are successful, more will follow. That, in itself, may be a problem.

In the meantime, I wrote John an email asking him about this advertisement. I’m looking forward to the resulting discussion (hopefully, controversy) as it should be good for traffic to our blogs! So, John, fire away! You know controversial topics and postings bring extra traffic.

Is this kind of advertising okay with readers? If so, would you visit the website? If not, why not? What would happen if all of our text links became like this? Naturally, some ‘readers’ might feel the need of such websites, do such website represent anything more than snake oil?