Business Week Magazine recently featured a story in which it claimsCredit-Card Balances Are Ballooning:

Consumers are turning to their credit cards to keep shopping now that most households can’t use their home equity as a virtual ATM. Solid hiring and wage gains have let people rack up larger debt balances with few problems. Now relying on plastic could place more stress on consumer finances, which ultimately could lead to a pullback in spending.

Well, it looks like consumers are continuing to fund their lifestyles by borrowing more on credit than before. However, with interest rates on credit cards going up to 20% or more, this is surely foolhardy spending on many non-essential items.

As I posted on my blog a few days ago, it can take quite a while longer than you would expect to pay back even small sized loans. So I dug a little further, and was horrified with what I found.

Example: let’s assume that a borrower has $1000 outstanding on credit cards (whether it’s recent or not… it doesn’t matter). Now let’s also assume that a credit card interest rate of 17% is being charged, and that the borrower is paying the minimum every month of 2.5% of the total outstanding amount. I was horrified that it will take you from 61 months to, according to BankRate’s own calculator… 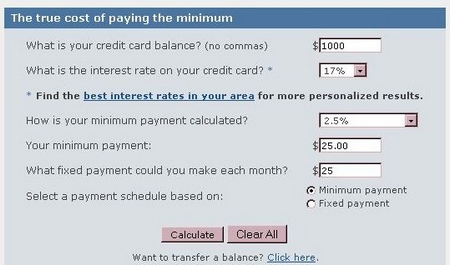 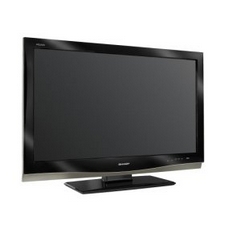 Ok, let’s put it another, that Sharp Aquos LC32D62U 32″ 1080p LCD HDTV currently retailing for about $998.88 could take more than 12 YEARS to pay off, and in that time, you could use the interest payments on the TV to buy another one!

In fact, that is approximately double the length of the expected life of the LCD you bought anyway! So basically, after 7 years, you still have the debt and your TV is bust!

Now, fine. You may be saying to yourself: well, I’ll have enjoyed the TV for a period of 7 years, and anyway $1,000 won’t be worth that much in 7 years time. And you’d be right…

I wonder, though, if you bought that TV and things would probably be fine. But it’s all the other things that might accompany such spending that would begin to cast doubt on using credit card debt at 17.5% to find your entertainment lifestyle: the new HD DVD player, surround sound system, bigger chairs, digital cable TV with extra channels (sports, movies, and all the frills), … If you began to add any or all of these to the same credit card, then you’d be finding that 144 months a long time!

I wish I could say that I was Moses on the Mount when talking about these kinds of things… It’d be much easier, but I have to confess that I did indeed buy a PC (one that I hardly ever used) on a credit card, justified all the expenses (and there were a lot), paid a lot of credit card interest over the year that I owned it, and eventually sold it at a loss (of course, it’s really devalued after about a year!) to my friend.

You can do the math yourself on how much interest I paid on that machine! If I remember, it was an Amstrad PC8256 running on the CP/M system.

Have you ever done anything silly with credit card debt? If so, do let me know.