Google Wave is a new phenomenon from Google that aims to supplement other modes of synchronous/non-synchronous discussion such as chat or forums.

This is what Wikipedia says: “Google Wave is designed as a new Internet communications platform. It is written in Java using OpenJDK and its web interface uses the Google Web Toolkit. Google Wave works like previous messaging systems such as email and Usenet, but instead of sending a message along with its entire thread of previous messages, or requiring all responses to be stored in each user’s inbox for context, message documents (referred to as waves) that contain complete threads of multimedia messages (blips) are perpetually stored on a central server. Waves are shared with collaborators who can be added to or removed from the wave at any point during a wave’s existence.” Wikipedia.

I’ve been trying it out for a couple of weeks, and and am still feeling my way around the system. However, if you are interested in trying it out, you need an invitation since the system is still in ‘private beta’.

Good news: I have about 15 to give away. All you have to do is just sign up for my feed via email. And I’ll speed the invite on its way to you. 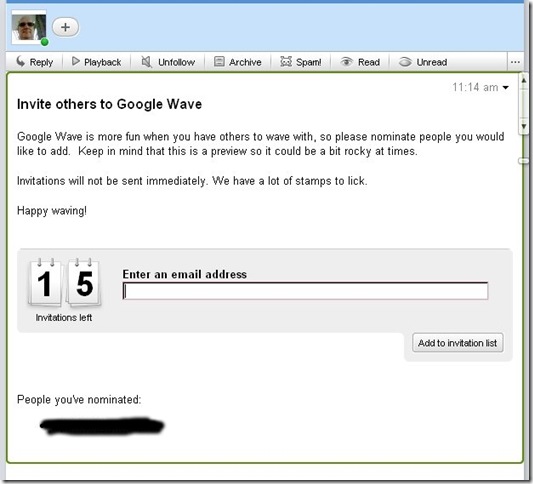 Waving you a happy day!