I had been a customer of HSBC for a few years in HongKong, then in Taiwan when I transferred my account to Taipei. I thought “Great!” Finally a bank in Taiwan that understands international clients, a bank that has good service, a bank that excels in providing good products. Was I wrong? YES on 2 out of 3 counts. 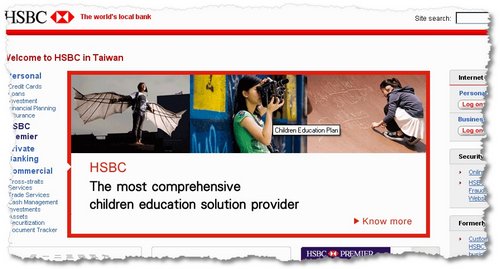 Their service though competent in face to face transactions really failed on indirect communications: I left email and notes in the system that we were supposed to use – they went unanswered so long I forgot about the query; I had my phone banking closed down twice because I prefer to do online banking; but the online banking service was somewhat lacking – and the occasional service had to be performed through the phone, such as opening a Term Deposit.

I tried to set up my accounts to handle electronic transfers (and was promised that it would be easy and efficient). This would have included my broker in the states, my regular payments, etc., in fact, the service NEVER worked, and I gave up trying to get HSBC to fix it; these weren’t the only problems I had. I also had office closing times that were switched just after I opened my account.

Worse, every single time I went into the office, there was a supposedly ‘new’ account manager to handle things: I never saw the same person twice. To add insult to injury, I never got my regular statements mailed to my home, and it took ages before I realized that they had carelessly written down my address so statements weren’t being mailed: this was despite asking several times and having confirmed my address several times. Wow!

In the end I closed my account. I never managed to utilize their service because there were so many problems just setting up supposedly basic services. In fact, I had planned to put all my assets in their care. But when I saw how little care they took over their clients, I eventually backed off, and left things as they are. Push came to shove, when they closed my phone banking for the SECOND time.

Today, to cap it all, I went in to see if I could buy traveler’s checks in British pounds. Given that they had branches in the UK, I thought this would be okay. But no. Sorry, this service is only for ‘customers’. Of course, I didn’t bite my tongue when I ‘reminded’ them that I had already closed my account because of their silly service rules.

To be fair: when I was in the UK, getting money was relatively easy with HSBC, and I did buy T/Cs before through them, though I think I had to order them. Their online security was great, too (since I do banking a number of times each month, the regular hassle just outweighed the benefits). And they did direct me to a bank that could provide me with what I needed.

Christine and I were discussing the situation tonight, and she made me realize that my accounts were just too small for them to bother with. I didn’t use their credit card, and wouldn’t run up a debt, even if I did. We didn’t use their mortgage services as they wouldn’t lend to me – the loan principal was TOO small, they said – which is a pity for them because we later remortgaged through our current provider, and will undoubtedly use a mortgage again in the future.

But, I thought: isn’t that weird? A bank doesn’t want to provide me these services so they think I’m a bad customer. In truth, I would have had the whole lot: mortgage, credit card, car loan, investments, and much more. I would have been a great customer for them, too.

Pause to Reflect: Your best friends are always underappreciated

Later I happened to call my REAL bank, Citibank to move some cash around, tidy up some deposits and get some cash for the trip to the UK next week. And they were so helpful and polite. I have never had problems with services being canceled, their interest rates tended to be better than HSBC, and whenever I’ve been to the branch, things were quickly sorted out. I’ll be testing their service in the UK to compare it with HSBC.

Many foreigners in Taiwan have bad experiences with the local banks, getting stuff done. Truthfully, I have never had any of the similar frustrations that I’ve had with HSBC with ANY of the local banks I have dealt with. Today, I went to Land Bank, one of the stodgiest of banks in Taiwan. I was served politely, accurately and quickly both times I did a transaction. It’s true: some of the local banks don’t have comfy seats, polite manners, but they usually get stuff done – with one big exception TaiHsin Bank. But then I didn’t choose to open an account there: I had to because of work. As soon as I quit, I closed it down.

There are problems with local banks, though: sometimes they have their own bureaucracy that’s hard to get through, if you are a foreigner; sometimes they charge more on international wires; they don’t always have a lot of foreign currency on hand; ATMs don’t always accept cards, and stuff. But I haven’t experienced as much frustration with any of the local banks as with HSBC.

What goes around comes around

HSBC has been in Taiwan for more than 20 years, and its focus on developing Wealth Management Services is undoubtedly a smart move. Overseas, HSBC is quite a reputable bank, and by most accounts, well worth dealing with. Unfortunately, in Taiwan, it’s getting the reputation for being a snob’s bank. That would be okay, if it was backed up by stellar service. In reality, service would barely rate 2 stars out of five. Alienating currently lower-income, lower net worth individuals now in a country with a fast-moving business environment, rising incomes, sharply rising wealth, really isn’t a smart move.

Disclaimer: This post is written by a former customer of HSBC in Taiwan and HongKong. I do not currently own shares or bonds in this company. I have no investments or any relation with this company other than outlined in this post.