For many the discovery of online auctions was like a lights-on event: it enabled them to get rid of many used or outdated items. For purchasers, though, it afforded them a way to buy stuff that was of value. Value, after all, is seen in the eyes of the purchaser! But some items are difficult to get rid of.

The old cell phone, like mine in the photograph, would prove difficult to get rid of even to a museum! Most people these days value the functionality and appearance of the latest phones: pda, wifi, camera, mp3, you name it! So it is difficult to sell your old cell phone… Some estimates put the total at over 1/2 billion phones in closets, drawers and cupboards nationwide! That’s a lot of phones. And the problem shows no signs of abating as people purchase new phones on average every 18 months! That’s a lot of landfill, too! Nearly 7% of people in the US throw them out in the trash! In fact, that phone has sat on the shelf of my bookcase for nearly 12 months now. It works fairly well! But I haven’t turned it on at all in that time!

However, CellforCash.com are offering a great way to solve these problems: you get rid of your old phone without feeling guilty, claim a little cash back, save the environment, and allow your phone to be reused in a way that benefits non-profits and charities working worldwide! And they throw in the shipping, too! 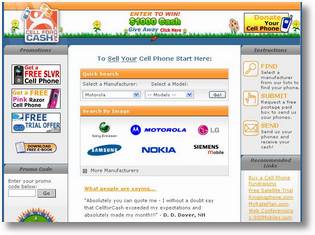 Of course, the other side of their business is a retail website that sells refurbished phones at great deals. You may also want to check that out before you buy your next phone! Buying a second hand phone may be the smartest move for InvestorBloggers after all! You get a late model phone, you can pick and choose the model, you know what’s likely to be a good or bad phone, you don’t have to pay for the inevitable depreciation that turns a $500 phone into $50 eyesore in less than two years, and you get to save a ton of money! Moreover, you are actually helping the environment just a little! Think about it!