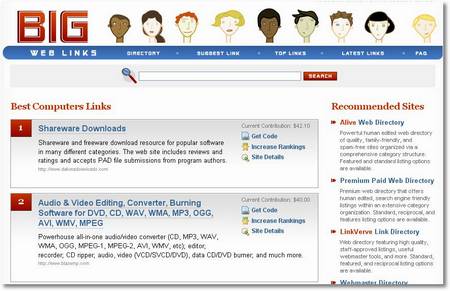 Directories have come in all shapes and forms over the years, but Big Web Links Bid Directory is taking a different approach than I have seen before. They have asked me to write a short review of their website/concept of web bidding, and indeed I shall try to present a balanced assessment of its prospects.

Concept
It’s quite a simple concept really. You register and pay for the listing of your website on their directory. Unlike other directory, though, you can pay for your link to be shown on page 1 of the listing or indeed be ranked on the top of the page. As you see here, Shareware Downloads has paid more than the #2 slot, so their ranking is #1 on the page. 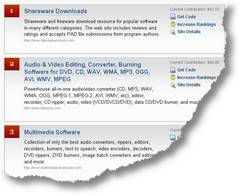 The advantage is quite simple: new websites in theory won’t be hidden away if the “contribution” is big enough. Additional listings are included if your website is ranked within the top 10 or 20. Perhaps what is truly unique is that after the initial listing fee of $29.90 is paid by the listing owner, anyone else, yes ANYONE, can contribute money to increase your rank. The highest contribution total will rank at the top of the list. Naturally, those who sign up earlier and keep bidding up their rank will find that it cheaper at the beginning to stay at the top, possibly gathering some good uniques. It’s Alexa is already 65K and rising. The home page is PR7 after the recent updates on Google.

The sign up form has a neat guide that helps those signing up to edit their placement so that it appears in two favored locations. I’ve done a dummy sign up to show you how it works. The red line highlights where InvestorBlogger would appear, and the rest of the block shows how much I would have to pay to be listed higher or lower. (see the graphic). That is a nice touch. 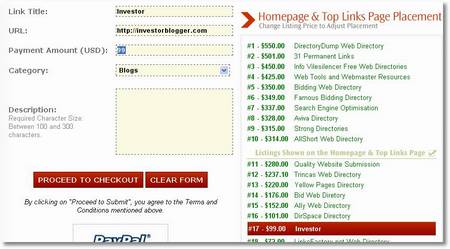 Contradictions
The success of this website really hinges on three contradictions: first, why would anyone pay to rank someone else’s site higher? There has to be a quid pro quo for this site to be successful. In other words, if you want a 3rd party to bid to increase the ranking of a site, what does that person get out of it except seeing their favorite site jump up the list?

There is also another problem that might dissuade people from bothering: since you have to pay an initial registration fee, when there are only a few sites on the boards, it should be easy to get your site shown on page 1 or 2. But what happens when the website becomes well-known, and dozens of websites are found in each category? Why would I pay a $29.90 fee just to end up with a ranking on page 25? That’s no better than Google’s search engine. Ah! You have control: you can whatever you want to be listed on the top of the page… it’s not difficult, just open up your digital wallet! It’s quite likely that, to remain listed at the top for anything other than a few minutes, it would become expensive fast, and it’s conceivable bidding wars would erupt on very popular sites with big ad budgets.

A final contradiction is that it is not clear (to me at least) people would use a site or indeed trust a site that allows listings to be bid up. Google still has quite a large ‘trust factor’ in its search engine. I’m not convinced that this will be a success in the long term, as I think there are far better ways to build up your PR, readership and so on.

Conclusion
The directory will work very well at the beginning for smaller websites on thinner budgets, for sure, as many categories have NO (Yes, NONE) entries. Later on, the directory will be a good way to attract visitors if your budget is big enough. I’d be interested to know what you guys think of this service. What future does a directory with solely paid listings have? Comment away.