In this series, I’m looking at our changing attitudes to money, and answer the simple question: are we all credit card slaves now? Part 1 was entitled Where did our attitudes to money come from?. Part 2 is Credit Cards, Bank Accounts and Salaries. Part 3 was The Credit Card Cascade and the Madness of Spending. This is the fourth installment in this week’s series.

What is a credit card slave?

In Taiwan, a few years ago, many banks started promoting a new form of credit loan that was a cross between a credit card and a traditional bank loan. After being approved, consumers were issued with ATM cards that could be used to withdraw cash at machines around the world; of course, the ATMs attracted fees, and the interest rates were high. Slowly, the banks pitches become more and more aggressive and the advertisements more and more outrageous. One bank called in Chinese Ã¢â‚¬ËœWan Tai Bank’ or Cosmos Bank ran such a successful ad campaign that they become almost a household name in Taiwan. The cards were called George and Mary… 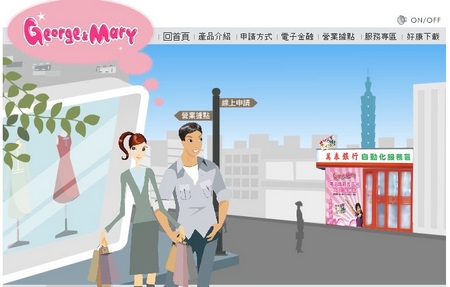 But many borrowers were unable to pay back the loans they had made, and the interest rates (now regulated) stood at more than 18% apr. Prior to regulation, rates had been much higher, and newspapers reported many stories of individuals and families killing themselves and their offspring as a result of their debts. There are quite a few stories in the Taipei Times about this issue:

In fact, an article last year cited over 3,000,000 credit card slaves (about 1 in 8 of the population!), and more than 400,000 Taiwanese have been declared bankrupt because they are unable to clear their credit card debts. (cited: The Asian Pacific Post Newspaper)

Slavery is defined by Wikipedia as: “Slavery is a social-economic system under which certain persons Ã¢â‚¬â€ known as slaves Ã¢â‚¬â€ are deprived of personal freedom and compelled to perform labour or services. “

While the definition is rather narrower than would warrant, it is possible to characterize credit card debt as a form of slavery, simply because the high interest rates deprive customers of their personal freedom as they struggle to pay off their debts.

To some Ã¢â‚¬Ëœcredit card slaves’, it seems they are indentured to the financing companies, and some financing companies don’t hesitate to employ less than orthodox means to ensure repayment. However, to suggest that credit card debt is a form of slavery is to underestimate one important factor: it is the borrower who incurred this debt, in the first place. The compounding factor of course is the high level of interest and penalties that are imposed subsequently on the borrower.

While this may depress many creditors who stare at the pile of mounting debts, this thought should encourage because if it’s something that was done by you, then it can be fixed, too, no matter the scale of the challenge.