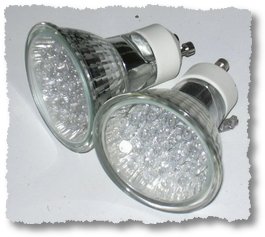 We’ve been swapping out our existing bulbs at school for the new energy saving bulbs, and cutting our use of energy by 40%, but we completely forgot about the 9 spotlights we put up about five years ago. Each of them has been consuming about 50W and we’ve been burning them 8-10 hours a day! It was only a few days ago that we realized HOW much each of those spots can burn, 450 watts or the equivalent of nearly 1.5 classrooms. But we only burn the lights in the classrooms about 4-5 hours a day, so we’re basically using them for nearly 2 or 3 times the regular classroom use, just for spots!

After seeing the ads in a local newspaper, I started investigating LED spots (there don’t seem to be any other type for energy saving), the usage seems to be between 2~4 watts: a considerable saving on power consumption. Also, the lights are cool, not hot to touch. And with an expected lifespan of 30K hours, it should be a sensible replacement. Except I couldn’t find any in B&Q… I’m looking for this type: LED Lamp with GU10 twist lock fitting, intended to replace halogen reflector lamps. (Thanks, Wikipedia!)

It seems the technology is evolving but is somewhat expensive, cumbersome to produce, and prone to problems with not producing enough light. We bought two samples: one to replace a full-size traditional bulb. It was quite expensive (NT$495), and when installed it was relatively dim compared to traditional bulbs and even the new energy saving bulbs. Also the light color was quite cold (almost white/blue). It is ideal for garages, less seldom used hallways, but for livingroom light these LEDs have some way to go. But the wattage was a little over 2.5w compared to over 100w regular bulb, it’s quite a saving and it should last quite a while. We already have a place for it.

At home we’ve reduced also our consumption of electricity for light from over 600 watts to a more respectable 325 watts. But we are using candle type bulbs, we can’t find anything in LED that resembles the shape, light color, or size that we need. I’ll keep looking. In the meantime, I was surprised at the different kinds of lighting that LEDs make possible. Click on the link in the image above, you’ll see some more unusual uses.

Are LEDs a good choice for InvestorBloggers? Perhaps: look at some of the companies producing or selling LED lights…