On January 18th, the local government issued some vouchers to all permanent residents and locals in Taiwan. These vouchers amounted to NT$3600 (about US$107) for every man, woman and child on the island. For some families, it was quite a big windfall, but for most it isn’t. The money is in the form of a coupon or voucher that can be used until September 30th this year to purchase goods and service at most places on the island. They were issued in the form of 500’s and 200’s. If you failed to collect yours, you still have plenty of time until the end of April. 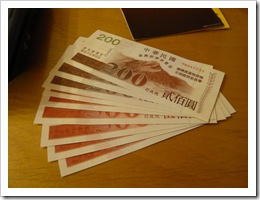 Yes, those are mine sitting on the desk the night I got them. Well, like any good member of the public, I did my duty. I finally used mine to purchase a new mobile phone. Indeed, I went rather over the limit with my purchase. But that’s what happens when you get mad at your old telephone company. I switched to a new company and bought a much better plan. Much Better. It’s very bad form to piss off your customers. More on my purchase later…

Should you swipe at all?

But I was wondering, sitting there with my credit card at the ready. Swipe! Swipe! Swipe! But will that be enough to save the world from the hangover of excess over the last few years? Really, will it? When the government tells its people to spend, rather than save, one has to wonder whose interests it is serving.

Could it be that what is good for individuals and families (cost cutting, sensible saving, reducing debt…) may be bad for the economy (lost jobs, decreased sales, less borrowing…) but what is good for the economy may be ruinous for individuals ( when things get bad, spend, borrow, and cut your savings…). It’s difficult to believe that ordinary families will be persuaded to part with hard-earned cash in the face of such uncertainty.

But why the vouchers?

It’s rare that the government actually provides such a concrete measure to increase spending. Perhaps the usual formula of cutting interest rates has failed to stimulate spending in any great measure. I mean, who in their right mind will spend more money when they are likely to be fired. Rather they will curtail unnecessary expenses, save more in the bank, and make do. None of which will help stimulate demand. Even bribing your public won’t help, will it?

Making something from nothing!

Evil ideas? So it got me wondering. Is it possible to take the $3600 and make some money with it? You’re not allowed to exchange the money for cash, can’t put it in the bank, or even give change for the money. So I brainstormed some ideas.

1. Buy some frames, pay for image processing, and sell some of your photographs as individually signed pictures to people you know, at a market, or to a store. You can limit the series or produce extra pictures to special order…

2. Buy a large item at a warehouse store, repackage it as a smaller items, find a way to add value (by packaging, including other items, through location, …). Buy a large box of instant or fresh coffee bags, a box of sugar packets and creamer, a box of paper cups. Make up sets of each, then sell them to office workers.

There’s no limit to your creativity. You don’t need a big budget, but you do need a sense of where your market is. Once you know your market, creating a product shouldn’t be difficult if you know how to sell to that market. What other ways can you use these coupons? Did you get them? What did you do with them?

This image is one of my favorites spots for gazing over Taipei.

You’ll find that it’s taken on a day when you can see the mountains in the South, lots of clouds, and you can make out the buildings!

The image isn’t crystal clear, but I didn’t have a good lens! I really should learn to take good pictures! Oh, and I also had only space for a few shots on my memory card. It was quite tragic. I could have taken dozens of great views!

While America celebrates the 4th of July, Taiwan is celebrating its own July 4th – the first direct (legal) cross-straits flights since 1949. Ma Ying-Jeou’s new government recently announced the easing of cross-straits relations, and has brought in something of a warming of cross-straits ties after years of stalling by the previous Chen and Lee administrations.

While it’s difficult to know what the upshot of this will be, it’s a welcome boost for tourist-related businesses in Taiwan, and is broadly a positive development in easing the political strains across the straits. In fact, just earlier this week, exchange controls on RMB (previously unavailable on Taiwan) were eased though not removed entirely.

But will this help to end Taiwan’s current international isolation? I’m afraid that won’t happen any time soon. European governments, including Britain’s, have slowly been upgrading their facilities and services on the island, but a full embassy they are not, and many embassy functions are simply not carried out.

There was a recent announcement that AIT (American Institute in Taiwan) was planning to move its base to Neihu, and plans were announced for garrison quarters in the new buildings. This however was quickly played down; but it’s clear that many western governments are now covertly laying the groundwork to establish diplomatic ties at some point. Such ties remain over the horizon for the time being.

Check out the BBC slideshow.

So this week’s events are just the next step in a long road towards sorting out the consequences of the Chinese Civil War. I won’t be making any bold predictions on peace talks, full-recognition, or any of a myriad of on-the-back-burner issues for quite some time.