These articles are presented for the Carnival of Making REAL Money edition for August 1st, 2008. Because there are only a few articles for this edition, I’ve only organized a few categories! Thank you for your excellent submissions and keep them coming! Summer time is no time to forget about personal finance, that’s for sure!

I’m definitely looking for articles that are readable, inspiring, and well-written for readers who may or may not have much investing or financial knowledge. Articles will cover making money in the real world, as well as online; being in business; making investments; making money through smart decisions; and aspects of personal finance, etc.. It is NOT about dieting, surveys, drugs, selling things, what you ate last night or any of a myriad of irrelevant topics. If you are not sure what is accepted, read the previous carnivals. It seems that a number of people don’t bother to follow the policy… As such, …

In short, I run this blog carnival in my free time, I receive no money for this activity, so I’d appreciate as much consideration as possible. It would be nice if you acknowledge the blog carnival somewhere on your website! Anywhere, it doesn’t matter: in a post, in the post you submitted, in the blogroll, etc.. or you can do a separate post when the post is published. This helps to drive traffic to the carnival, where people can find your posts!

In short, thank you for taking the time to consider submitting ana rticle

This is just little notes for those of you interested. My Friday ramblings!

This month of April bodes well for the $10K mark that you will see posted. I’ve already done estimates for this target, indicating that I will pass the mark by the end of April. Stay tuned for the income report (it won’t be spectacular, but more than enough to take us over the barrier).

It’s been quite a trek to reach the target. But I’ve managed to earn that $10K and I’ve managed to learn a great deal about the what’s and wherefore’s of making money online and offline.

My friend, Steve, who runs a website and education agency here in Taipei, was telling me that affiliate marketing is where he’s headed. This is quite a wake-up call for me. In fact, I have been doing a little affiliate stuff for a while through venerable deals, such as Amazon, webhosting deals, and so on. You’ll notice that there are a few affiliate deals on this website, including TTZ media ads, MillionaireMate, etc.

These affiliate earnings just don’t generate much but I’m always surprised by how much Amazon brings in. I generated $95.81in sales (it’s not so much in actual earnings) since the beginning of the year. Not bad. It’s a little encouragement for me, because affiliate marketing always seems so hard.

Other projects in the works include the next installment of the Carnival of Making REAL Money. It’s been quite a dog this time, with over 120 submissions (much junk!) and 81 verified. I had to eliminate dozens of entries for the simplest of reasons including:

It’s amazing how many people think that Blog Carnival is just a receptacle for their spam. It’s also amazing to see how people just do not bother to read the individual Blog Carnival’s criteria. It’s also quite shocking that someone (and there quite a few!) who keep resubmitting the same (junk) articles each issue (and never seem to wonder why it’s not published!)…

But to those other great article writers who submit each issue, I must say thank you AGAIN! Just check out the carnival to see who they are!

I usually give a credit card report and the past few months I’ve made slightly costly mistakes. This month, though, I only had three transactions to report: NT$2000 for the regular life insurance payment, NT$2018 that we paid for a meal in a restaurant in late March. I’m a sucker for Indian food ever since I worked as a waiter in a well-known Indian restaurant in Edinburgh called Kalpna. The restaurant in Taipei’s Tienmou is a fairly recent addition to the local Indian Food scene which has been improving markedly in the last few years.

The last was a license for a JumpBox installation of WordPress. This is called a virtual appliance. The appliance installs a full Apache server with MYSQL on a Linux base. On top of that, you get an install of WordPress as well. It works well, I find. I had to pay for a license to be able to access the FTP side of things. And when I deployed it at school, it just worked out of the box, and across all the computers. So it was well worth the fee of $49.99.

Total credit card fees were about NT$5,555 with no penalties or credit card charges either! Nice!

Well, it would have been nice, but to celebrate the $10K mark, I finally bought a new 19″LCD monitor from ViewSonic… It wasn’t particularly expensive, nor was it an impulse buy. I really would like to have two such monitors (one for each pc) so that I can be a little more productive on my blog by running two screens at once.

I’ve also been buying a few CDs, which added to my ‘splurge’… so I thought I’d leave you with a couple of the YouTube Videos

And the theme music from Grey’s Anatomy, which is a song I love,

and this song by Snow Patrol…

Have a great weekend! 😀

In Tuesday’s News on InvestorBlogger Dot Com, as we delve into some stories of interest to me! But first…

Here are some of my top stories over the past few days, do check them out!

Dot Com Carnival and Carnival of Making REAL Money were both published recently. I enjoyed doing the carnivals a lot. I’ve begun to be a lot more picky about the kinds of articles that I link to in the Carnivals, so you can be sure there’s a lot of good reading. In fact, for the Making REAL Money Carnival, I chopped 66 submissions down to a mere 16! But there are some good articles, especially the feature article. 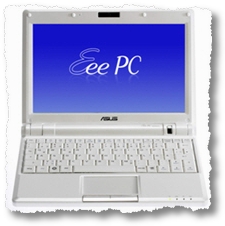 I have no idea how I missed this story… but it seems that in the summer ASUS will release a new version of their portable Linux-based system. Now that’s going to be quite a system. Here’s the basic news, some of which was suggested earlier by fans of the first Eee PC:

ASUS has made several innovative improvements with the next generation of the Eee PC Ã¢â‚¬â€œ dubbed the Eee PC 900. These new technologies will bring about a brand new concept for Internet access with 1G of memory, larger storage of up to 12GB, and wider 8.9-inch screens. These new Eee PCs will cost 399 Euros each, and will be available in summer this year Ã¢â‚¬â€œ to select countries on the first wave of launch. All of these new models will be Windows ready, and will provide users with a chance to enjoy a brand new PC experience while on the go.

Payperpost: A good source for publicity

Well, after running my first campaign on Payperpost, I ran a second campaign as well. The total views for the articles written are 1477 with the second campaign scoring slightly more. There have been 19 clickthroughs as well from those posts totalling 1.3% as a conversion rate. Since the campaign didn’t demand that readers actually do anything, the clickthrough rate is comparable with Adsense (before the changes). At $4.08 per click, though, the price is quite high. The campaigns will continue for quite a while effectively reducing the per click price and perhaps increasing the conversion rate.

The first two campaigns were effectively free for me as I was using a Payperpost Coupon; I tried out different ways to word the post offer. The second campaign was more effective, but still I need to make some changes, esp. to the issue of titling the posts. I was surprised how many (six, in fact) posts simply mentioned the blog name as the post title. Disappointing.

Suggestions for running a PayPerPost Campaign are attached after the sample campaign.

Check out the blog. Write a buzz type post about InvestorBlogger.
Create a link to one post in the archives (you can search the archives and find something worth commenting on) as well as a link to the main page.
www.investorblogger.com/archives
Feel free to disclose this post as you wish. PR is not required, but your blog must be listed in Technorati (must have the Technorati badge).
I will review all submissions and vote your tack rating accordingly!
So enjoy the writing the post, check out the archives and good luck!

Next time I will word the task more specifically than this time. Also, “adding the ‘vote your tack’ rating accordingly” was very helpful as the quality of submissions was much better the second time. Also, increasing the minimum tack rating and adding a RealRank of 2 helped to ensure the quality of the posting much more. So in opportunity #3, I’ll be promoting my own OPML download for the top bloggers.