In my earlier post, I described one of my mistakes: selling before the stock had had a chance . In this article, I will describe how NOT to invest in a bubble.

InvestorBlogger started (according to my account history) investing in September 1998 a few years before the bubble peaked. It was an exciting time as I would sit watching the CNBC lunchtime shows to find out what was going on.

In 2000 and 2001 I suffered a huge lapse in judgement by buying the ETF called QQQ (or QQQQ) as it is now known. If I had bought at the right time, I’d have done quite well. Anyway, look at the chart detailing the buys. Most of the buys occurred between March 2000 and August 2000. 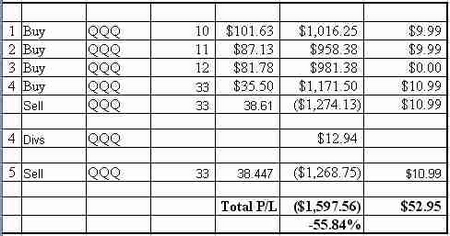 I originally bought the QQQ at a price that is 65% more than the price is today, and that was already a high valuation. But at that time, QQQQ was reaching 5,000 and there was talk that it would overtake the NYSE.

Well, of course it didn’t. Then as the price deflated after the bubble burst, I kept adding more. In the second transaction, even though the price was down by more than 12%, I doubled my share; and then again at $81.78. After that, the price went into freefall before finally bottoming at around $20.00 per share. 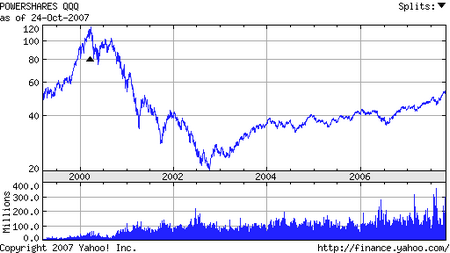 Of course, to compound those mistakes, I had already exited some other stocks with lofty valuations, and little business sense (theirs and mine!). So I lost much more than that money: one of the stocks was CMGI.

During those giddy years, we all tried to justify our expectations with the notion that we were ‘doubling down’. But, in retrospect, the only sensible course would have been to get out well before the price dropped below $80.00. At least, I’d have saved most of the capital, and had some small losses as well. But when I finally exited the position, I exited losing 55.84% of the total amount in this stock.

Nasty, very nasty. But finally I had the sense to exit . If I had exited today, I’d still be down over 39% on the total. Of course, my money has been better invested since then, but my total portfolio hasn’t not grown much since then.

Over the next few months, I’ll be adding my other stock disasters. But you can read about NAThere and AMTD. What would you have done in that situation? Did you sell? Did you buy? Or did you wait?

Content edited for corrections a few minutes ago. Graph of QQQQ from Yahoo! Finance. I’ve cut precise dates for ease of reading.