Have you tried the new XP compatible browser from Apple? If you haven’t you can download it. I managed to install one copy on one of my XP PCs but not the other. I’ve created a JPEG displaying my website in it!

Now, this blog isn’t going to talk about how wonderful Apple’s Safari is… their own website can do that! 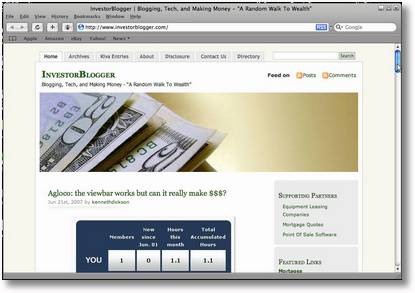 Pluses: it’s install is straightforward, and it imports a lot of stuff automatically, including your bookmarks. It has that familiar Itunes theme (which I loathe) but it’s clean and easy to navigate around.

Also, the screen area on startup is much bigger than Firefox. There are also several other things I noted: it’s much faster than IE, and somewhat faster than FF 2.0. I love the snappiness of the browser. I also like the organisation of the RSS feeds, much cleaner and easier to read than other browsers (except ‘Flock’ which is a FF derivative). 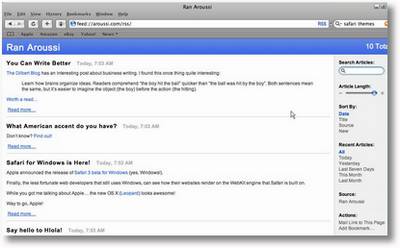 Another great point is that it is integrated with QuickTime and ITunes. So for home users and non-commercial customers, this should be a big selling point. It’s also a very shrewd move on the part of Apple to integrate its offerings much more tightly with Windows. In fact, Apple’s Windows offerings are less of an attempt to allow Windows onto Apple as to persuade more Windows Users of the value of Apple products. Home users should rejoice!

BUT it isn’t without its problems. Firstly, it requires XP2 to install, so it wouldn’t install on two of my machines at all. It only runs in Windows XP (SP2+) and Mac. Unlike FF which can run on any Windows 95+ version right upto Vista. Moreover, FF is available on Mac AND Linux platforms. Though I don’t use either at the moment, I find that the ‘Open’ nature of the platform comforting if I ever decide to ditch Windows for Mac or Linux. I’m also attracted by the Mac Platform because of the small forms of the new mini-Mac and its ease of use.

A second problem for me is that FF is also hugely extensible as is the new version of IE. In fact, the extensibility of FF is one of its chief selling points. I couldn’t see any obvious way to create or add extensions or even themes for Safari in windows at least! So we’re stuck with the metallic Itunes theme. It ain’t pretty.

So, while it might suit for browsing pages, and reading feeds at home, I can’t use it at work, won’t use it for blogging much, and certainly can’t get anything like the power or variety that my current install of FF has!

Good one, Apple! But to win some converts, you’ve got to try harder. B++ for effort and style.