For those of us who were early converts to Yahoo! (before 2000!) when there weren’t so many great online gallery systems for your photos, and Web 2.0 was still someone’s Ph.D. thesis, you were probably uploading your photographs to Yahoo! Photos precursors. Yahoo! Photos offered 15MB of picture space that was shared later with Yahoo! Briefcase. It probably looked something like this jpeg. 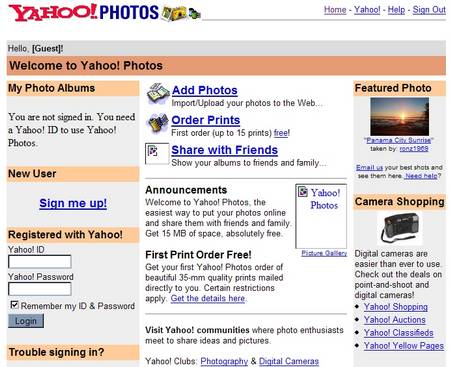 Remember that? I do remember the hideous orange. Oh, well. It was convenient, free, and you could use your Yahoo! ID with the service. Great.

Well, I forgot that I had some pictures on Yahoo! until I received this email reminding me that Yahoo! Photos was being closed down, in favor of Flickr. So if you are still using Yahoo! Photos or have forgotten photographs that you don’t want to lose, esp. images from emails and attachments that you don’t have copies of elsewhere, you need to read the following email from Yahoo! Photos and act before September 20th, 2007!

For some time now, we’ve supported two great photo sharing services: Yahoo! Photos and Flickr. But even good things come to an end, and we’ve decided to close Yahoo! Photos to focus all our efforts on Flickr ? the award-winning photo sharing community that TIME Magazine has called “completely addictive.”

We will officially close Yahoo! Photos on Thursday, September 20, 2007, at 9 p.m. PDT. Until then, we are offering you the opportunity to move to another photo sharing service (Flickr, KODAK Gallery, Shutterfly, Snapfish, or Photobucket), download your original-resolution photos back to your computer, or buy an archive CD from our featured partner (for users of the New Yahoo! Photos only). All you need to do is tell us what to do with your photos before we close, after which any photos remaining on Yahoo! Photos will be deleted and no longer accessible.

Of course, we hope you’ll join us at Flickr (you can even use your Yahoo! ID), but we also realize that Flickr may not be for everyone. In the end, we want you to find the service that’s right for you, and we hope you take some time to learn more about your options before making this important decision.

Please give us your decision by Thursday, September 20, 2007, at 9 p.m. PDT. After that time, any photos remaining in Yahoo! Photos will be deleted. Click here to make your decision, or review a list of our frequently asked questions.

Thanks for being a part of the Web’s largest photo sharing service ? we hope to see you over at Flickr!

And here are a few photos I recovered of my former students! 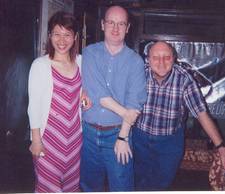 A friend (Tim Fox) on the right, me in the middle, and a former student! 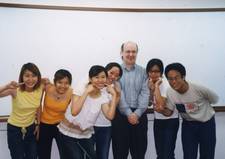 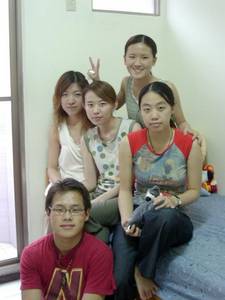 I do miss those classes! Anyway, thanks for giving me the chance to recoup my old photos.

To ease the process, Yahoo! is allowing you to move your photos to one of several services, including Flickr, Photobucket, Shutterfly, and one or two other less familiar choices. Notably there is no option to move the photos to Picasa, which would be my preferred choice, given the excellent facilities that Google provides now. It seems that they originally allowed moves to Kodak galleries, but that option is now missing, though the text still refers to five services. Currently, there are only four on offer.

So, don’t forget to reclaim your photos and make the appropriate changes. Yahoo! is giving you a generous amount of time, so don’t delay!