After fixing my own wordpress install , I can get back to business with posting some stuff…

It seems that OpenOffice is now updated to version 2.3.1. I downloaded it last night after I saw the nag screen. I’m not really sure what was fixed… but the website writes:

The OpenOffice.org Community announces the immediate availability of OpenOffice.org 2.3.1. This is a minor bug fix release with no new features for users. However, as this release also fixes a security vulnerability, we recommend all users should upgrade to this release. The next release to contain significant new features, release 2.4, is currently planned to be available in March 2008.

It’s a big install, so I’m now downloading it once and installing it on all the PCs I have. Wow! That is so much nicer than M$Office. Interestingly there is a growing number of extensions now available for Ooo.I use BorderLiner and I’m trying GoogleDocs2OpenOffice.

John Cow and his Cows

It’s true. John Cow really is branching out in unexpected ways into making mooney offline. Yesterday I was walking in the night market in Taipei behind National Taiwan Normal University when I ran into ‘his’ ice cream store. So, of course, with Dancing Cows before my eyes, I had to try some EggNog and Coffee ice cream. At NT$100 for two scoops… he seems to be doing well. John, how about a free scoop next time I come by? 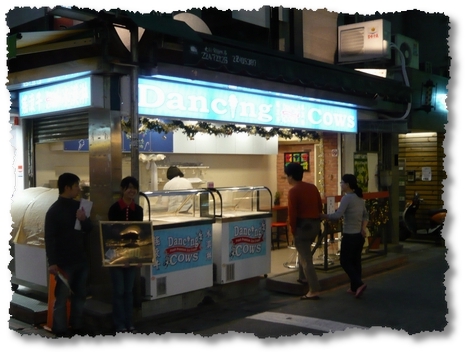 AFP published a story that is interesting to read about the burgeoning market for loans that are made by individuals to individuals. The featured story includes information about several of the big ‘uns: Prosper, Kiva, and Zopa (in the UK).

I’m generally very supportive. What a great ideaÃ¢â‚¬Â¦ a peer-to-peer lending program that allows small lenders to lend money at attractive rates. The interest rates that you get will be much more attractive than simply lending money to the banks, and letting them do it for you! Zopa really facilitates the interaction between lender and borrower, and charges only a small fee. And the risk is reduced, too, by lending to multiple borrowers, so that, if there’s a default, only part of the money is at risk.

I’d love to be a part of this system, because the interest rates are quite attractive, but since I live outside the U.K. or U.S., I can’t. For those of you lucky enough, if you are looking for a way to make extra money, help people (altruistically or not), then this might be a good way to go.

Of course, there is the The Ugly Side of Microlending. This article reports on how big Mexican banks profit as many poor borrowers get trapped in a maze of debt. So it isn’t all thumbs up.

In other bank news, Asia Times recently reported on how foreign banks are increasingly buying up Taiwanese banks that have fallen on hard times. Citibank has bought several, HSBC has done so, ABN AMRO bought one, and is now the subject of a RBS buy out, and Standard & Chartered has also done so:

Faced with the increasing presence of WordPress, Movable Type (owned by SixApart) has gone OpenSource again. While WordPress has quite a lead in terms of volume, support and use, it will be interesting to see what happens to MT in the longer term. In fact, there have been three big announcements in the last few day: OpenSourcing, MT 4.1 Beta, and a reseller program. It’s quite clear that MT is trying to make up for lost ground. One reason I’m interested is that it supports multiple blogs, and I might use it on my other blogging site to manage a number of blogs with occasional content. But first, I’ve got to try it out.

Happy Blogging… and a happy Christmas when it comes…!