There are now so many competing browsers on your PC that, after years of a monopoly by Windows’ Internet Explorer, we’re finally having some competition. And the stuff coming out is AMAZING! This post will look at five of the choices now available for PC users running Windows XP or above. Do note: many of these browsers have Mac and Linux installs or variations. I’m writing this on a system that is in essence a five-year old system with some modifications. It is also not XP SP2. I decided not to upgrade the software on this system. So for browsers, what choices do you have on an older system? Surprisingly, quite a few.

My first browser of choice is the venerable Firefox 3. It’s stable, fast and has an endless array of plugins that can be added to your installation. The current version has, I’ve found, been a little unstable on my platforms when it has invoked the Gmail site, causing my PC to slow unduly and sometimes even crash. But perhaps that is the fault of my nearly six year-old PC system! The add-ons are great but can also add extra burden to your PC or even crash Firefox. This installed fine on my older PC.

A seriously interesting variant of FireFox is Flock. In essence, this is Firefox in social mode and provides a lot of interaction with Web 2.0 sites, like Flickr, YouTube, Blogger, Facebook, Digg, etc.. One of the reasons I like this version is that there are a number of ways to interact with the Web 2.0 and it facilitates each of these methods. For example, you can post directly to your blog, upload images, or interact with people on Facebook without closing your browser window or what you are looking at. Plus, many of the plugins for Firefox also work for Flock. It also installed well on my PC. It is a bit of a resource hog, but so far hasn’t crashed my system. 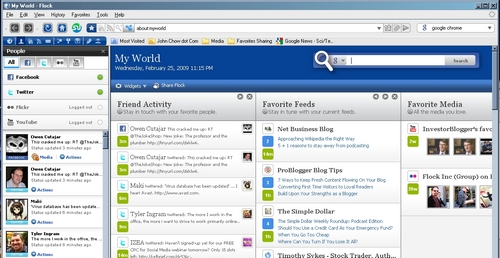 I use Google’s Chrome at work and on my small portable, but originally I couldn’t install on this PC because of some technical reason or other about it not being XPSP2. Anyway, I liked Chrome because of its ease of use, relative speed, and its independent windows. I hate losing my work when one tab or window becomes unstable because of slowloading scripts or worse. Google designed a good looking browser that helped to mitigate that. For a while, I used it regularly at work, but I had hoped that it would install on this computer. And it did. But each time I use it, it crashed. Right now, it refuses to load any pages. So I haven’t any screenshots of it. It just refused to work. I can’t recommend this for older computers at all. It will install but it refuses to run.

No download link is provided since this failed to run properly on my system. You can google it yourself!

I’ve been using Opera for sites that were causing problems for Firefox and I’ve been impressed at its power, speed and ease of use. It was far more innovative in its GUI than any of the other browsers and is offered on a far bigger array of platforms than any other browser. While I do not use it everyday, it is my backup browser of choice because it is so rugged. Not all sites, however, play nicely with Opera. Its strengths lie in its speed, size and its ability to provide browsing, rss feeds and mail/chat services in a small and powerful format. It was the first browser with tabbing, to my recollection, and has the ability to add widgets. It also runs quickly on my system taking up a little ram only. 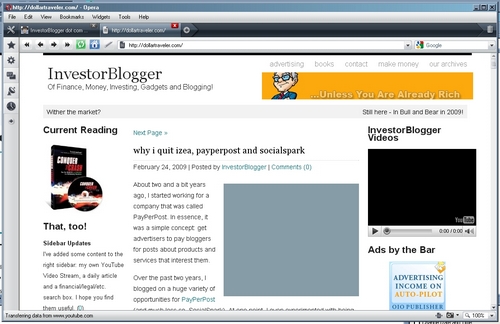 I’ve reviewed Safari before, but I was frustrated for a number of reasons with Safari. I didn’t like the page rendering, it didn’t install on older machines like mine, and I didn’t take to it immediately because many of Firefox’s conveniences weren’t provided. I was able to install it on my work machine but it didn’t seem to like SP1. Now however, Safari 4 beta installed smoothly, runs fairly quickly on my system. It seems to borrow heavily from Google Chrome’s stylised offering, with buttons in the top right, and the private browsing feature. It’s too early to tell if I will switch at home to Safari. I didn’t at school and eventually removed Safari 3. Who knows? I might even keep it this time. 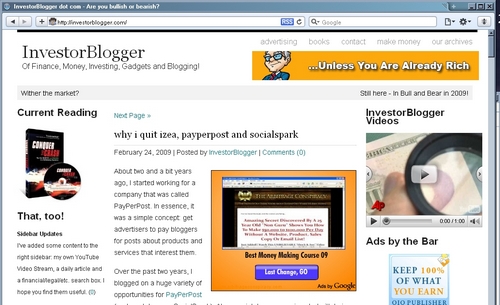 And now the proof of the pudding, which browser uses the most resources when showing my website’s first page which comes in at less than 600Kb.

It’s Safari which is using over 250MB of Memory Usage. Flock and Firefox are second and third. And Opera comes in at the bottom. So, Opera really is an efficient, lower resource, more flexible browser! Why do I not use it more?

Which browsers do you have installed on your computer? What do you prefer? Which are less reliable? Share your views…