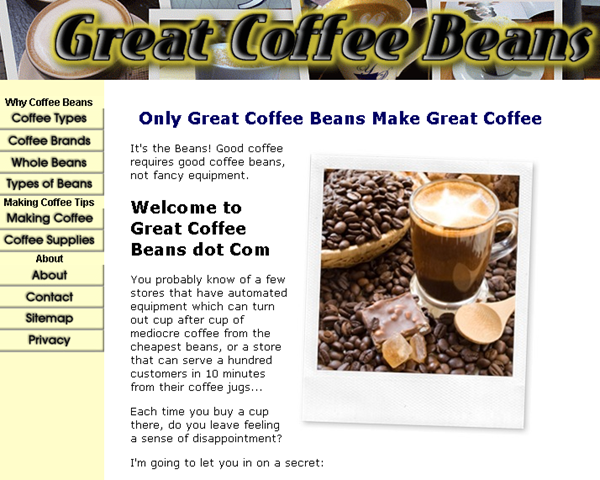 Well, since the last update, much of the site has been finished updating. All short posts have either been consolidated into much longer articles, unpublished for revision, or removed. I only have 50 articles now but about 100K words in total. So the average lenght is much longer than before.

The massive changes in organization have also finished and are settling down: 4 silos, each with 10~20 articles of about 2000 words each (average). Each silo header page is quite long.

However, I’m not sure that my site structure is correctly understood by Google yet. Categories are settled now, but tags are still dynamic (but not indexed).

I’m still playing with some URLs to get a better feel, but the redirection plugin tracks the changes. I just have to be careful… I don’t end up with a series of redirects.

Page views have jumped 30.38% since November, in my target market, though the page consolidation has made a mess of some stats. The content has been moved & redirected. Now that much of the consolidation is done, I’m hoping that more stability in rankings will return. Less flux, more stability. Google stats in webmaster are right now not encouraging.

Income wise, well, I’m not expecting a lot but there is some upwards movement. I hit $42 in December despite a quieter Xmas & a very bad post Black Friday period (unlike most other people here). Somehow it balanced out.

I’m still updating content on an almost daily basis, adding images, reorganizing, editing as ways to keep the content fresh. I’m now posting my pages to LinkedIn, Twitter & FB… just to get it out there. I’ll do Pinterest soon.

Current strategy is to weed out all the copycat content thieves who have stolen my content, there are still quite a few pages leeching my content. So I’m planning to get them removed from Google or wherever else soon. One or two pages are particularly affected. In some ‘light’ cases, I’ll just rewrite 50 words or so. It’s more effective.

The mailing list is a complete disaster with dropping subscribers, and few sign ups right now. Backburner. I’m still figuring out ways to create links so I will do a bit of commenting, guest posting and link building through organic means… kind of floundering there.

So goals? Can I reach total 12K page views? That’s a goal! I came close but reaching it would surpass the site’s first go-around 7 years ago.
Can I consistently reach $100pm? Well, I’ve streamlined my amazon links, got rid of the dud links (there were quite a few), and am now experimenting with different formats for ads/products. Adsense only accounts for 25% of the income but the RPM is poor. Compared to my original placement (I use automated placements), this isn’t so hot. So I’m wondering if I should go back to placing ads myself.
Feedback?
We’ll see… Thanks for sticking around. If you have any thoughts about my achievements, challenges & goals, I’d love to hear them!

I’ve had some success boosting traffic even with many fewer pages, and several data hiccups which meant that my Analytics code was missing in both Oct/Nov for about 10 days in total. Page views are increasing again. Y-on-Y we’re looking at about 100% growth.

All short articles have been merged, rewritten or removed. I no longer have articles less than 300 words and the majority are now 900~3000 words.

Another hit to traffic in Oct/Nov was the fact I seriously re-organized all the structure into a very simple structure. I’m not sure I’ve got it right yet… as I struggle with categories posts. But I’ve built silos for the main themes.

I’ll never have more than 100 pages on this site again. Thin content is over. I’ll also pare back non-performing content, in favor of content that people read. I have a lot of material to draw on, however.

It’s better than the past but I haven’t broken $40pm yet, probably because all the changes have unsettled my rankings and I’m still trying to figure out the best way to layout my money pages. I’ve tried page links, native ads, and now I’m trying direct image/linktext ads on Amazon.

My pages are loading in about 3~5s, which for the resources I have at my disposal is poor. I’ve tried many solutions but often I lose the Native search ads that I use to generate income. I’m not sure why that is. It happened in the week prior to Cyber Monday… so sales dropped off a cliff, even though Pageviews were up. I finally found out it was Cloudflare’s issue, though I was unable to fix it reliably.

I’m still auditing my content for DMCA infringements… I’ve found several pages that copy my stuff without permission. I’ve done some backlink removal too. But most of the bad links and illegal copies stuff have long since gone from Google.

If I break 10K pageviews, I’ll post an update. Promise!

I just came across this interesting article from Spencer Haws @ https://www.nichepursuits.com/adsense-whistleblower-my-thoughts-on-the-google-adsense-conspiracy-theory/

It’s always tempting to believe conspiracy theories! They always have a certain amount of ability to explain things… So I was a little skeptical about the Adsense conspiracy theory myself. I ran some back of the envelope calculations… Whoa!

Let’s correlate the data with the actual income of Google at that period. Would it shed any light whether the allegations were true or not? What I found on initial searching did not fill me with confidence… I’ll simply post the links for you to check out.

So what happened in the 2Q? Well, Google search also provides that answer.
https://www.macrotrends.net/stocks/charts/GOOG/alphabet/eps-earnings-per-share-diluted

2Q and 3Q revenues were much weaker than expected, esp. when compared to the previous year. So what happened?

Well, I’d expect the usual “Wall Street” earnings pressures to deliver… Q on Q. But in those days, how much revenue did Google make? And how much ‘earnings’?

How much did Google search generate in terms of total profitability? Are the numbers there?

So what happened in the search engines? Well, as it happened…

Panda was in the midst of updating and Penguin came to visit!
https://moz.com/google-algorithm-change

So here you have a situation where they were buying a major mobile phone competitor with woolly numbers (as it quickly turned out), they’d just rolled out Panda/Penguin over that period… and suddenly the revenues started to look weaker than expected.

I can imagine that management gulped hard when they realized their bad timing. Combine that with some typical earnings pressure from Wall Street, then some senior management heads would be rolling if different departments didn’t make their numbers.

It’s hard to determine the amounts that we’re talking about and if they’re significant. But in 2012, CPC for Google was falling as well, esp. since the Adwords platform and Adsense program are money spinners for Google. Google’s net income was $3.3billion + . Motorola was haemorraghing money, CPC was going down, Google had issued Penguin/Panda… Mmm.

We know there were approximately 331 million shares issued at that time. So to produce a blow out quarter would mean that there would be pressure on the income generating centers. If much of the money was recycled through Google’s own partner sites, they could still legitimately hoover up the money and produce better results, since there was essentially no profit-share.

So how would banning publishers go?

Let’s make some assumptions. For every cent on the dollar extra profit, you would need 331,000,000 x 0.01 or approx. 3.3 million dollars. We already know that some on Wall Street expected Google to produce 10.04 profit. They actually reached $10.12, or 8 cents more. So that is approximately $26.4 million dollars extra. Perhaps more, if you factor in the loss-making units from Motorola.

Now if every account approaching $5000 payout that was banned… how many would you need? Turns out not that many: 662 accounts, assuming an average $5000 for every 1c extra profit, or approximately 5600 accounts for 8c of profit. Of course, if you’re padding for more than just 8c… due to losses elsewhere, the number of accounts could be much higher.

Wow! Suddenly, this makes sense. Now how many accounts were banned? Have we any idea of knowing?

But the evidence is more than circumstantial. Though Google admits nothing in the settlement, and claimants will sign an NDA… Interesting.

$11 million dollars divided by $5000 would suggest that there were at least 2,200 claimants on a raw numbers basis. Many accounts would have been smaller, some bigger. Who knows? I don’t think that Google even knows the number of accounts they closed to make their figures. Settlements won’t be 100% for sure, and the lawyers need paid as well.

I am very glad that Google is around, I hope they make BILLIONS of dollars HONESTLY. But this situation just did not meet the sniff test! They really shouldn’t have put their Google advertisers through this wringer.