If you were lucky enough for Christmas, then getting a videocam would have been in your Christmas stocking, right? Well, by now, you’re likely wondering, how do I convert those files? If you’re less lucky, then you’ve been shooting lots of movies with your still camera in QT format, not AVI, worse, WMV… and you’re dying to convert them to AVI to edit in MovieMaker (or iMovie)… it can be very frustrating to find the right tools that actually work.

Currently, I’m converting QT at 25FPS to AVI at 29.97FPS, then editing the footage. Once done, it’s being put into WMV format, and then converted to FLV… What a nightmare that is! And the result isn’t that good… It would be much better to edit the files in AVI, then simply convert the result to FLV…

So YouConvertIt could be a great solution. The purpose of YouConvertIt is to convert your files, images, audio and video to other formats… Previously, you had to rely on the format you needed being available as an option in the ‘save as… menu’ or ‘export menu.’ Often times, it was not. For example, Word didn’t use to convert documents to PDF, though OpenOffice did. Excel was the same. When you’re busy trying to reach a deadline or finish a piece of inspiration, this lack of export options in many pieces of software can be very frustrating.

Most of the time, you’d have to search on google for software to convert, and you have to pay through the nose for such software because the software writers have you over a barrel, and they know it. Perhaps, though, those days will be over for some users… 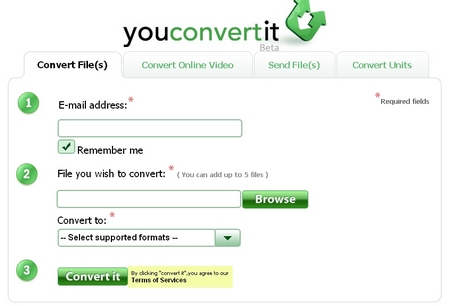 To give the service a test, I’m doing a sample conversion for you. You can try it yourself at home. But to save myself the hassle I outlined earlier, I’m converting a QT movie from my old camera to an FLV format. I’ll post the result in this post. This image was taken from an exciting fairground ride at Brighton Pier! It was all music and lights! Not a supercoaster, but it had its own charm! 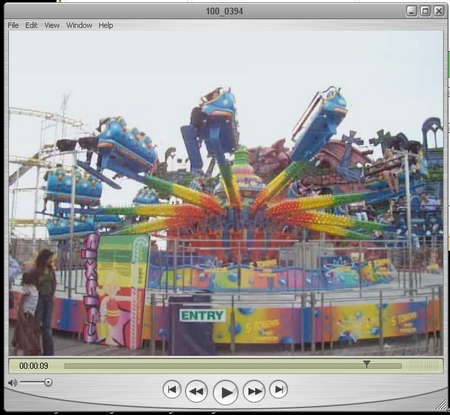 First, click on the Convert Files on the top, then you’ll see this form. 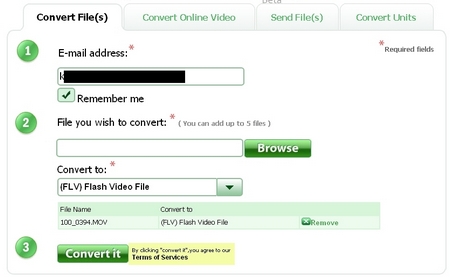 It’s easy enough to fill out. The file is then uploaded to their servers (obvious privacy implications there!)

The video was promptly delivered to my email box and looked like this. Naturally, the link expires in seven days so it’s a good idea to be prompt in downloading the result. The conversion process doesn’t offer any way to manipulate the images, change the settings, or anything else. It’s a straight conversion with defaults that you may or may not like.

I clicked on the link, sure enough it was there. I then downloaded the file to my pc, and uploaded it to my server (now that would be really neat if I could automatically set it there…). Obviously, you will need a fairly snappy upload capability (mine’s at 2mb, I think), no desire to fiddle with settings, and a good memory to download the result later! It will suit people in a hurry, on vacation, or away from their desktops. Let’s see the result in FLV format.

I did manage to trigger this error message. Woops! It’s not robust yet, and the error generated wasn’t at all helpful… it befits a beta, though.

And the final result is…