It’s rare these days that ‘big media’ does much right, but this website is one such effort… I hope it stays around… What is it? Well, in these days of online radio, it’s not difficult to start an online radio station effort, and there are literally THOUSANDS. Indeed, tradtional radio has largely joined the crowd of online stations, but until RadioTime, there were few places to easily access all the traditional radio stations… 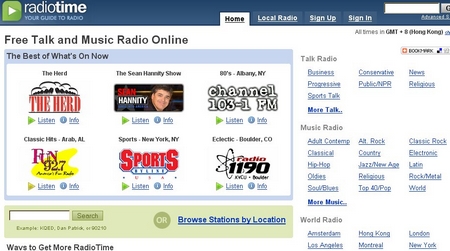 Simply, it’s a website that brings traditional radio to the web. You can tune in and listen to any of the stations, and when you tune in, one of several integrated media players opens in a small popup window. I was quite excited about this, because while online radio stations really do complement traditional radio, there are an awful lot of places where there are no equivalents: the music selection is narrower on RadioTime, but there’s a lot more variety of news, sports and more ‘traditional’ fare than on online stations. You can also select stations by geography, say New York City or London. Try it… so if you want to hear what Dublin sounds like in the morning or Taipei sounds like late at night!

RadioTime is a privately-held Dallas-based company focused on making traditional over-the-air radio as available as possible online, through your PC and in other devices since 2002. It supports a free, personalized website, a comprehensive guide to radio, membership account services, and desktop software and hardware packages to allow consumers to listen where and when they want.