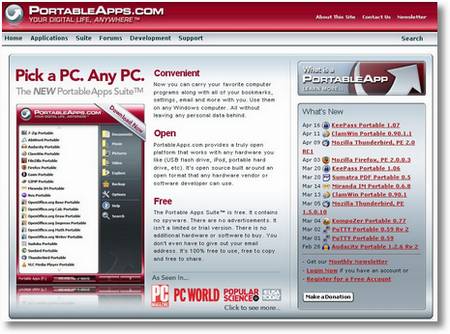 I’m amazed what people are doing nowadays with the open source software. Yes, that’s right people are putting many of the most popular ones in a format that can be used off a USB key.

The website is called PortableApps.com. Now that’s pretty neat. The selection of apps (27 as of last count!) that can do this neat trick is expanding quickly, and currently includes:

to name but a few. You can run Linux off a key, too. The Ã¢â‚¬Ëœkey’ point is having enough space on one of those USB drives to save the programs, the data, and whatever else you stuff on there. But with space increasing to 2GB or larger, I don’t think it’s going to be much of a problem. Also, functionality is limited to PCs running Windows (and WINE for Linux) but not Macs (shame!). But Windows versions from 98~ Vista are broadly supported.

I also tried to experiment to see if I could run those apps across a network of windows pcs by using a shared folder. It works, but slowly! Mind you, my machine was OLD (ie. nearly as old as Windows 98SE!). Anyway, John wrote:

Running the apps over network shares is pretty common with university folks that get their own network drive. The same rules as USB apply (compression = faster start, etc).