It seems InvestorBlogger finally regained its 100 subscribers from a year ago. Unfortunately, it was unclear who the 100th subscriber was, whether from email or just the regular feed.

So, I’m afraid I can’t give away the extra EC for two reasons: I can’t access the original forums where I made the original offer. There’s been quite a fuss about that change, on the boards. I’ve already said my piece.

But perhaps my bigger mistake was not releasing how difficult it would be to tell who the 100th subscriber would be. 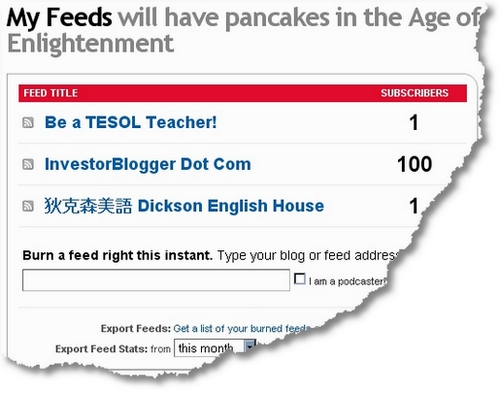 The total in Feedburner is an aggregate of Feed readers, Email Subscribers and so on. This is not broken down into chronological order, so it is nigh impossible to tell who the 100th subscriber via email is, as the number of feed readers changes daily. Mmm. This is not what I had hoped. So I may have to rethink that competition! Any suggestions?

Update: Well, we blew through the original target. We’re now approaching 120 subscribers! Wow! That was a surprise.