(Or don’t let this happen to YOUR blog!)

Recently, many popular and less popular blogs were cashing on the craze for buying and selling blogs. BloggingFingers, CashQuests and a slew of others have been sold. It was John Cow who recently posted what happened,they were bought by IEntry.com for a largish sum (about $15,000).

CashQuests, aka Kumiko Suzuki’s blog (no link because it simply redirects), used to be one of my favorites. It was available online, and I came across it in the days after she lost her Adsense account (a post that I can’t find!). Since then, I enjoyed her making money blog and her posts on a number of topics including: getting traffic, making money, advertising and so on… 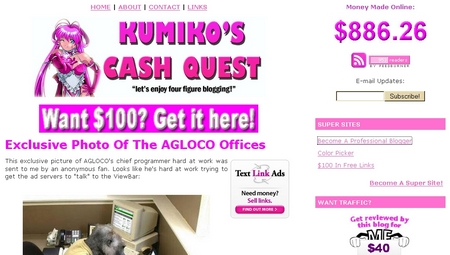 This image was taken from Wayback Archives, and the quotation from her About page wrote:

My goal became to take the BS out of the blogosphere (creating the logophere?) and bring some originality and creativity into the world of ‘making money online’! I hope you like the result!

Kumiko really managed to create a strong identity with provocative posts, ideas and ways to make money. The transition from Kumiko’s CashQuest (as it was on Blogspot) to Cashquests.com was a slow and methodical one, but it wasn’t without its bumps. One Blogger even suggested that the blog had been sold then as well (but if it was, it must have been a private sale).

But during this time, there was a strong sense of continuity (whether posts were written or edited by her, we don’t know). In the archives you could still find some of her best posts, too.

After the BIG sale

Unfortunately, the new owners have not taken the blog seriously at all, except to milk as much money through ill-placed affiliate advertisements. The new blog has been left to its own devices without much obvious capable management or intervention. 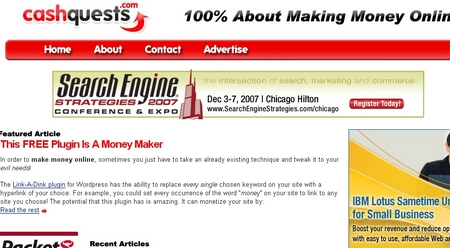 You can see this neglect in a number of ways as the new owners have shown no real mastery of the WordPress application or its potential for creating a successful or vibrant blog:

It’s all in the numbers

In fact, these seven tactics really show new owners how not to run a blog. And, unfortunately for the new owners, the results are beginning to show: Traffic is down, Page Views are down, Comments are way down, and the absolute number of visitors is alsow down. While the original sitepoint sale claims that the traffic was about 500 Uniques per day, it’s hard to see with a ranking of only 55K on Alexa that the traffic could be that big still. There has been little in the way of new postings to attract readers. In fact, it seems that everyone is waiting for the new owners to make themselves clearly known, for a new and outspoken voice to emerge, and for the blog to recover.

However, I’m predicting this will NOT happen. Why?

Taking over someone’s blog is always going to be a difficult task, because of a number of obvious but overlooked reasons: but most of all, a BLOG is NOT a regular business. It is much different: 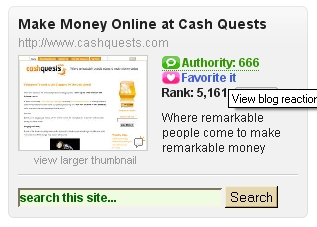 Look at the number of the Authority…!

The original (and often inspiring) driving factor is the original blogger, who is able to make their personality PART of the blog’s personality. Can you imagine John Chow’s blog without John Chow? In recent months, we’ve seen the Kumiko Identity become much vaguer and much less of a driving force. Fortunately, the articles were generally getting better in quality, but still there was something different as the blog evolved.

A blog is not a candy store!

And, there in lies the key: the readership may sense that the blog has lost its authority, its presence, perhaps even its leadership position. The readers will then check back occasionally to see what’s going on, but the loss of that stature in the eyes of the readers will erode the relationships with the readers that the original blogger managed to build up.

A quick look at the stats of CashQuests.com will highlight the current deterioration of the blog, its infrequent posts, its poor commenting record, and decreasing traffic. 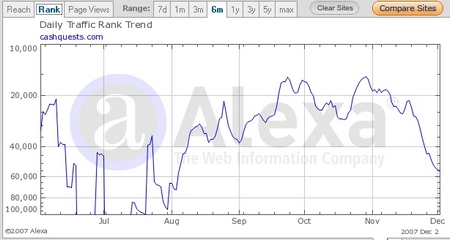 The blog was officially sold on 19 Nov 2007. So you can see where the traffic started falling fast!

Are you planning to sell? If so…

If you are planning to sell your blog, and you want your blog to survive longer than a few months, you may need to spend some time trying to deal with these problems by ensuring that there is a much stronger continuity between owners. Otherwise, while you may be happy with the money you made, your blog, your readers and your new owner may be wondering what is going on: as we are.

For more reading, check out this discussion on selling blogs and this one on buying blogs.

I’d like to know what you think of this phenomenon of buying and selling blogs… Have you ever thought of buying one or selling yours?

This quotation is never more appropriate as the foundation of one’s health (mental, physical and spiritual), one’s social wealth (family, friends, society, etc.) and one’s material wealth (money, assets and income) are all directly related to our habits. So, pause for five minutes today, and ponder the impact of his words on whatever problems you have. And remember: keep it positive.

Chasing the latest investment craze is incredibly easy, as we are bombarded with success stories at every turn – the neighbor who got in on the hot IPO, our brother-in-law with his 30% hedge fund return last year, and the advertising campaigns of the top mutual fund companies, proclaiming their latest star performers (how often does a mutual fund company take out ads listing their best and worst five funds?!). Collectively, these stimuli lure us like a siren’s song to chase the latest winners, be they asset classes, managed portfolios, or individual stocks.

“Hope is not a strategy” – Thoughts from the Frontline Weekly Newsletter dated August 31, 2007.