Taiwan has always been in an awkward position in its relationship with China. At different times, Taiwan has been the aggressor, the victim, had the upperhand, been at the bottom of the pile… While the actual position of its relationship hasn’t been that important to Taiwan’s political and economic position, in recent years Taiwan’s relationship has vacillated between ice cold and tepidly warm. 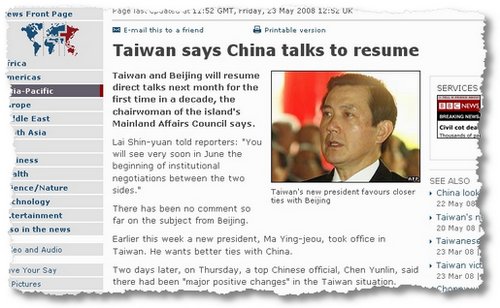 This vacillation in its diplomatic relationships with China, Japan, the US or Europe, hasn’t been conducive to good business, developing the economy here, or increasing the security of Asia Pacific. In fact, since the 1992 warming with Beijing, relationships have hit several low points with the mainland with the missile threats, the missile crisis in 1996, the cold-shouldering of Taiwan under Chen Shui Bien from 2000 ~ 2008.

Whatever one’s position on the final state for Taiwan’s future, whether it is independence, status quo or reunification, no one can deny rationally that the uncertainty is a factor that limits business opportunities, creates additional risk, and uncertainty.

With the new presidency here in Taiwan, and the assumption of office by Ma Ying-Jeou one can only hope that we are about to enter a period of increasing stability with the PRC. Seeing the news story on the BBC website with the headline “China talks to resume”, filled me with some hope perhaps the first in nearly 10 years that Taiwan could at least begin to emerge from the shadow of its big neighbor.

I don’t expect much to evolve from the talks in the short term, there are just too many practical issues that need to be worked out first: trade, travel, communications, visas, currency exchanges, ownership rules, … But if Taiwan is to ensure its own security for the future, attempts at cutting itself off from the PRC for whatever dumb ideological reason will only serve to increase its insecurity.

However, by tying the PRC increasingly into the well-being and fate of Taiwan – both politically and economically – seems to be the only real way to create a scenario in which the PRC cannot afford to cut off what has become a part of its own society, anymore than Germany (despite antagonisms that are historical) could cut itself off from France, or the UK from Europe, …

This is something that the PRC would be hard pressed to admit, but increasing its own involvement indirectly or directly with Taiwan would make it significantly harder for the PRC to launch any kind of strike against Taiwan. Their generals may whine, complain and moan, but the generals don’t provide jobs and social stability any more. It’s the factories, the companies, the money, … that all comes from the wider economy, both domestic and foreign.