Suzuki, for me, was always associated with the manufacture of motorcycles and small trucks. But in the last few years, Suzuki has manufactured an interesting range of small engined vehicles appropriate for crowded roads in Taiwan and Japan. First there was the Jimny, then the Swift, and now a car that I really like: The Swift VVT. It ain’t no Zonda, John either! 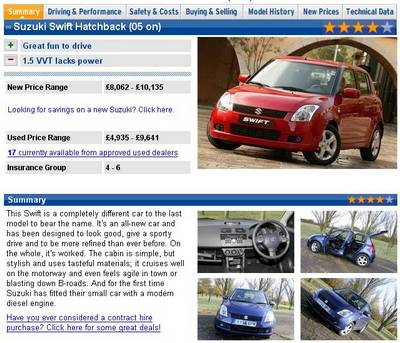 This is the righthand drive model for roads in the UK. There is even a diesel version, too. It’s nippy, easy to park in crowded Taipei, with good fuel economy (about 25% better than my Mazda 323), and the four door is big enough for a small family. It’s no Benz, for sure! But there are quite a lot of thoughtful touches that are usually only included on much more expensive cars: electric wing mirrors, CD players that can play MP3s, to mention two that I noticed. With smaller needs for fuel consumption, you might find it a little lighter on your wallet, too!

Turns out from reading Wikipedia, the car has had quite a long history (and confusing one)… but the model featured here is known as the Suzuki MK4 Swift Sport. Suzuki’s website has a great 3D model that you can play with by rotating the car by 360 degrees.


Would you consider driving a small car where you live?