Wow! I’m having a lot of accidents today. Normally I wouldn’t blog about these, but each of them is directly linked to blogging.

I was clearing out the backlong of files for my server, emptying databases, and tidying up other stuff as well. Having been on Dreamhost for four years, I had accumulated over 50 mysql databases, twenty or so users (some now redundant), lots of installs, etc.. I began emptying the server in August last year, but only went part of the way. So last night I started deleting unused databases, and one or two infrequently used FTP users.

Unfortunately, this is what happens when you are careless…

I’m told that Dreamhost has backups of sites for such emergencies, so I wrote begging for help. I wonder if they’ll get back to me soon or not. I don’t have a backup of that site myself, either. So I’m hoping that the owner will have a backup … he should. Right? If you don’t have a backup of your site, esp. the database and the files… you shouldn’t be reading this. Go and do it. NOW!

This is the said email: it’s just like that 911 call you hear on the news, distressed voice on the other line…

I was checking through the users on the manage users tab… and I don’t know how it happened but I deleted user ‘kuixing’… everything is gone!

I swear I didn’t hit delete or anything… but I backtabbed from the delete user screen. Then I refreshed the main FTP user list page… https://panel.dreamhost.com/index.cgi?tree=users.users&

Is it possible to restore this user’s data?

Of course, I want to hear good news, but I’m braced for the worst. Let’s hope the give the news soon. Dreamhost service hasn’t been as good as I experienced before especially since I upgraded to their VPS hosting. Let’s hope they come through!

Don’t put your glasses on the floor!

I had a quick nap in the afternoon. I must have taken my glasses off, and put them on the bed as I slept. After getting up, my wife came in and fluffed the blanks. Glasses became aerial and end up on the floor whereupon her left foot comes into contact with the left lens (the expensive lens) and suddenly I have several lenses of varying sizes. Naturally, since she is my wife, this is *not* her fault! My old IBM notebook met a similar fate at her feet. 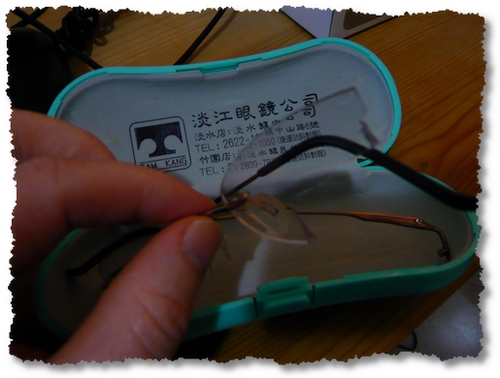 Of course, this is going to be expensive to replace, but fortunately the frame is fine somehow. I’ll give you a quote. Since I spend a lot of time at the computer, I need glasses so I have three pairs in all. I’ll be pressing my other pair into action this afternoon.

I want to hear good news on that one, too. But I know that it won’t be cheap to fix them!

Then we’re almost out of coffee at work, the last precious coffee beans in the coffee jar. I put them in the grinder and hit grind. Then I stopped to see the quality of the grind, and the lid flew off scattering coffee half-ground beans ALL over the floor. Result: we all had half size cups of coffee. It was all the more delicious because it was so precious! The lack of coffee will affect productivity, too. I’d like to hear good news about those beans, but I have to go to Costco . That’s always bad for the budget and the waistliine.